There are three main reasons why the price of Bitcoin has dropped sharply in the past 12 hours. The reasons are an overheated derivatives market, growing doubts about the market and the lack of upward volatility.

The futures market was overheated before the correction

Before the retreat, the bitcoin derivatives market was extremely overheated. The futures funding rate was around 0.1%, which is ten times the average of 0.01%.

The futures funding rate is a mechanism that achieves equilibrium in the futures market by stimulating long or short contract holders based on market sentiment.

When there are more long contracts or buyers in the market, the financing rate becomes positive. If it turns out positive, buyers have to compensate short sellers with a portion of their contracts every eight hours and vice versa.

For almost all major cryptocurrencies, funding rates rose to around 0.1% to 0.3%, meaning the market was extremely overfunded.

When the market is so crowded, the likelihood of a long squeeze increases, which can result in many futures contracts being liquidated in a short amount of time.

According to researchers at Santiment, there is “trader doubt” in the market as to whether BTC would hit $ 40 again. They write:

Thinking Face There are growing doubts from traders that #Bitcoin will revisit $ 40,000. However, based on address activity and trading volume, the long-term trend is still looking good. Watch carefully to see if the usage rate of $ BTC remains high. “ 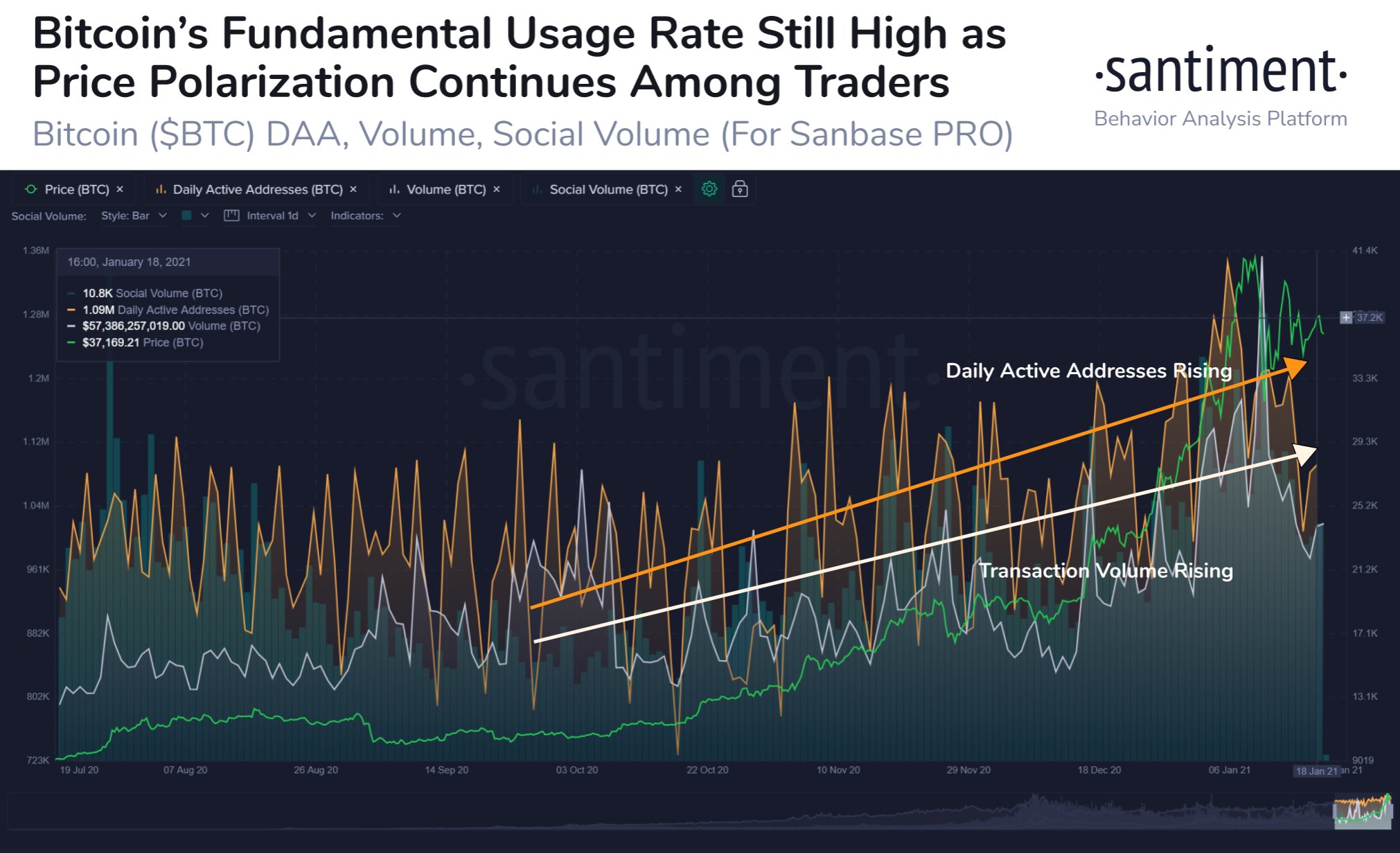 Bitcoin price is a cause for concern among traders. Source: Santiment

The fundamentals of the Bitcoin blockchain network like address activity and trading volume remain strong. However, market sentiment has deteriorated over the past week as BTC continues to struggle to break out of the $ 38,000 resistance area.

Bitcoin has seen poor response from buyers in the past few days compared to the initial rally to $ 42,000 in early January.

In the early stages of the rally, there was often a big reaction from buyers when Bitcoin fell to key support levels such as $ 35,000.

However, since mid-January there has been weaker response from buyers at key levels of support. This suggests that expectations of a rally towards the $ 40,000-42,000 resistance area have eased, at least for the short term.

Selling pressure on Bitcoin came mainly from Asia in the first two weeks of January. As the correction overnight on January 19 shows, Bitcoin has also noted weakness in the US market.

The combination of limited upside volatility and lack of upside momentum appears to make traders cautious in the short term. This likely means that BTC will see an extended period of consolidation through February.