The idea of ​​market cycles is widespread in finance. The most basic principle is that what goes up has to go down. The rationale behind it is that when prices are low, investors accumulate and prices rise. When the price peaks, selling pressure will increase as the holders try to cash out, pushing the price back down again.

If you bought Bitcoin (BTC) in 2017 or earlier, this will look eerily familiar to you. It essentially describes what happened during the last bull run when BTC hit a high of $ 20,000. Hence, most crypto holders are watching current market conditions with bated breath.

So far, apart from a few corrections, prices have held their losses or at least quickly regained them. What are the chances that it will continue? Can we expect 2021 to develop in a similar way to 2017 and early 2018, or is the cycle of the current run just beginning?

Echoes of the past

In terms of the similarities between now and 2017, there are some critical parallels, the first of which is the relationship between BTC prices and the halving of mining premiums. Every time the reward for mining is halved, it creates a new shortage in Bitcoin supply.

In the same period after halving in 2016, the percentage increases were significantly lower. By April 2017, BTC had increased by around 150%. If the markets follow the same pattern, they will see even more epic gains, followed by a major crash. Of course, such price movements only apply to Bitcoin after a halving. But wherever BTC goes, the rest of the markets tend to follow suit.

There are also some correlations between on-chain metrics in 2017 and 2021. Both 2017 and 2021 show a high percentage of BTC being accumulated and held, according to Glassnode. In fact, the months leading up to the 2021 Bull Run show that more BTC has been kept inactive than ever before in history.

Active addresses recently hit an all-time high of over 22 million, beating the previous high of 21.6 million in December 2017.

Perhaps less tangible, but still relevant is the feeling of euphoria that dates back to 2017. The emerging markets for decentralized finance and non-fungible tokens, the meme stock spectacle followed by an unexpected resurgence of Dogecoin (DOGE) and the general excitement surrounding the crypto markets are all reminiscent of the heady days of the first era of coin offering.

Despite the similarities, there are also many differences between the crypto markets compared to 2017, mainly due to an advanced level of maturity. Four years ago, crypto was reserved exclusively for retail speculators. Speaking to Cointelegraph, Simon Kim, CEO of the Crypto Venture Fund Hashed, said that “the market is running on a completely different foundation,” adding:

“First, different DeFi projects create value based on a clear business model. Second, we are seeing record-breaking active investments from institutional investors, and finally, various entrances and exits are now emerging, including not just PayPal and Visa, but large banks as well. “

The banks in question include Goldman Sachs, Citigroup, and Deutsche Bank, all of which recently announced plans to integrate cryptocurrencies to generate more bullish signals. And don’t forget the boost that came from Tesla, which announced it had invested $ 1.5 billion in BTC.

Chad Steinglass, Head of Trading at Crypto Capital Markets, CrossTower, explained why the entry of corporate investors, banks, and payment giants matters, and predicted the type of mainstream adoption that has been debated for so long:

“The basis for institutional investments are deeper pockets and a longer investment horizon than the traders who fueled the 2017 run. Add to this the explosion in access to crypto markets for non-merchant participants, including fintech giants PayPal and Square, and we are seeing both an expansion and a deepening of the investor base. “

The widespread availability of derivatives is another factor that contributed to a price hike this time around. It may be hard to believe, but in 2017 there were few exchanges, mostly BitMEX and OKEx, offering futures trading. Institutional futures offerings didn’t arrive until December 2017 when the Chicago Mercantile Exchange and Chicago Board Options Exchange launched their own Bitcoin-backed contracts.

Although there was some speculation at the time that these launches sparked the start of the crypto winter, the availability of derivatives has undoubtedly attracted more professional investors and ultimately helped drive prices down.

Of course, given the regulatory uncertainty that existed at the time, none of the above options would have been possible in 2017 – another factor that indicates that this time is something different.

The metrics also indicate some differences between the 2017 cycle and this one. One thing that stands out is the variance in bitcoin dominance. Throughout 2017, BTC’s dominance dropped dramatically from 85% to a low of 32% – the lowest point it has ever seen. Fall reflects the appetite for altcoins, which was due to the launch of Ethereum and the subsequent ICO boom.

In contrast, since it dominated 60% again in the summer of 2019, BTC has remained fairly stable around this mark. Ether (ETH) has also shown similar patterns. Since the epic price spike of 2021, both BTC and ETH have seen a slight surge in dominance at the expense of the broader altcoin markets. Hence, these metrics imply that the new generation of investors are less capricious and more committed to BTC and ETH as flagship assets.

Bitcoin price volatility has decreased somewhat in recent years, at least in relative terms. As Bloomberg recently noted, the 60-day rolling volatility is now less than it was during the last peak.

Exchange flow volume is another metric to consider. In contrast to the 2017 bull run, far less BTC will be traded on the stock exchanges in 2021. This shows that investors are keen to keep holding, making BTC scarcer for traders and adding to the price even further. 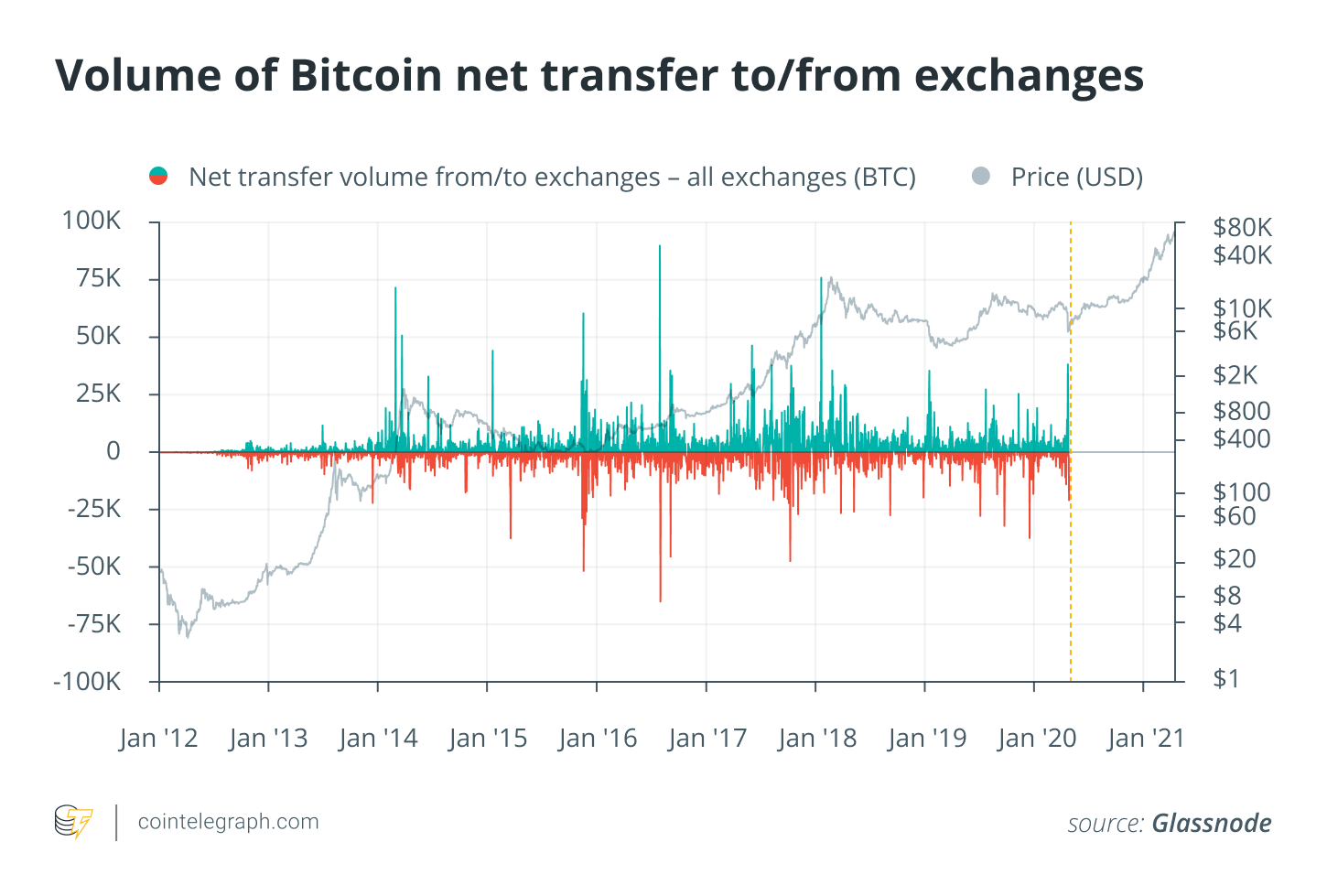 When you zoom out, the overall picture looks very different now than it did in 2017. Although much of the stock market has performed better than expected under the pressure of the ongoing pandemic, investors are far more uncertain today than they were years ago. This has likely sparked an upward trend for Bitcoin as a safe haven asset, which is also reflected in gold prices.

Simon Peters, a market analyst at eToro, believes that while there may be further volatility, a price crash may be preventable, and explains to Cointelegraph: “I think there will be a significant correction in the Bitcoin market at some point, but not the 80 % -90% declines we’ve seen in the past. “He justified the upcoming shift:

“The population of crypto investors has changed compared to previous years, with greater institutional involvement leading to greater capital inflows. Hundreds of millions, if not billions of dollars, are being converted into single purchases, and this increased liquidity will result in more stable prices. “

In addition, the pandemic has accelerated the transition to all things digital. The looming prospect of digital currencies from the central bank and the increasing reliance on digital payments make cryptocurrencies appear even more powerful as a fully digital asset class.

When we weigh all the different factors, the argument that this bull run is a little different from the 2017 cycle seems more convincing. While it is very plausible that the markets will see further correction at some point, it seems less likely that there will be such a sudden and dramatic crash as it was in early 2018.