Cardano social media mentions have increased since the beginning of the year, and during that time the price of its ADA token has more than doubled. This outperformed Bitcoin Cash (BCH) and is the sixth largest cryptocurrency by market capitalization.

A deeper dive into data from Twitter data couldn’t identify a specific driver behind ADA’s bullish price action, but data from The Tie showed that Cardano mentions recently hit an all-time high, with price tracking the surge.

Keyword analysis of Tweets related to Cardano also failed to identify the motivational factor behind the recent surge in social media. However, terms such as “pool”, “stake” and “stakeout pools” have been the most common triggers in most of the discussions held by community members.

In private comments with Cointelegraph, Joshua Frank, founder of The Tie, said the chatter about an “interoperability bridge between Cardano and IOTA,” which began Jan. 2, seems to correspond with the move up and a relatively sharp surge in tweets.

This relates to a current discussion about Iota’s discord, in which the co-founder of the project, Dominik Schiener, was asked whether the Iota Foundation was interested in developing a “bridge to Cardano”. In response, Schiener said: “Yeh 100%. As soon as we’re done, I’ll get back to Charles. “

“24 hours after the idea began to be discussed, Cardano saw tweet volume spike 63%, and the price spiked 27% versus the USD and 25% versus the BTC, suggesting that this was an uncorrelated move . “ADA price vs. tweet volume. Source: The Tie

The development enters the Gougen phase

Cardano’s roadmap shows that the project has recently moved from the Shelly era to the Goguen era.

The Shelly era brought decentralization to the core of the network, allowing ADA holders to set and delegate their tokens to earn rewards.

After the project entered the Goguen era, the focus of development is on the integration of smart contracts and the ability to create decentralized applications (DApps) in the network.

The addition of smart contracts and DApps opens up a whole new area of ​​functionality to the Cardano network, including the ability to create decentralized financial applications.

In a recent interview with Cointelegraph, Cardano founder Charles Hoskinson spoke about the future of DeFi and how the team will “take the lead in the DeFi space by building partnerships across the African continent”.

According to Hoskinson, DeFi’s true potential is being realized in developing countries, where he sees the potential to add 100 million new users over the next three years.

“Built to provide liquidity for the world’s poorest people and enable them to build wealth and protect the wealth they have acquired.”

Setting out the ADA rally

Over the past two weeks, price and volume have increased more than 200% with the current daily trading volume averaging $ 3 billion and ADA trading close to $ 0.358. 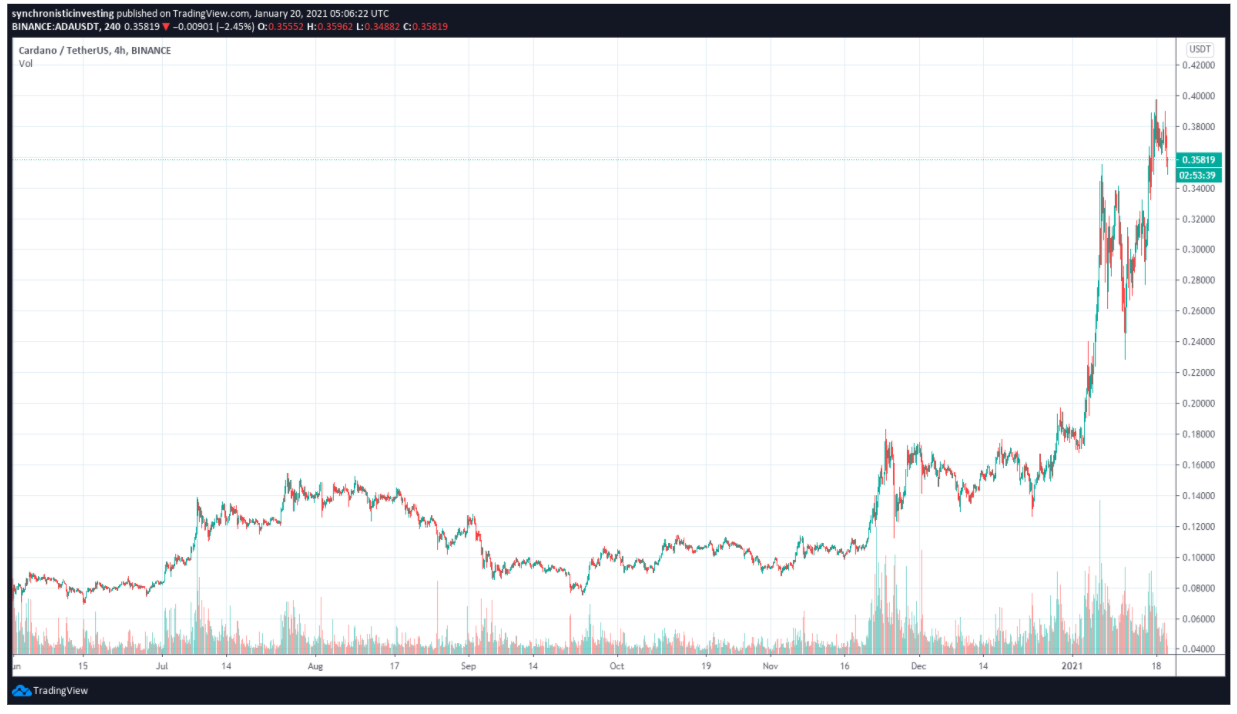 One possible cause of the upward pressure on prices is a decline in circulating supply due to a large number of ADA holders participating in the network.

Staking Rewards data shows that 70% of total ADA supply (21.84 billion ADA) is used on the network. Investors who have a stake earn 4.28% APY for each epoch (5 days), and the payouts are automatically split at the log level. 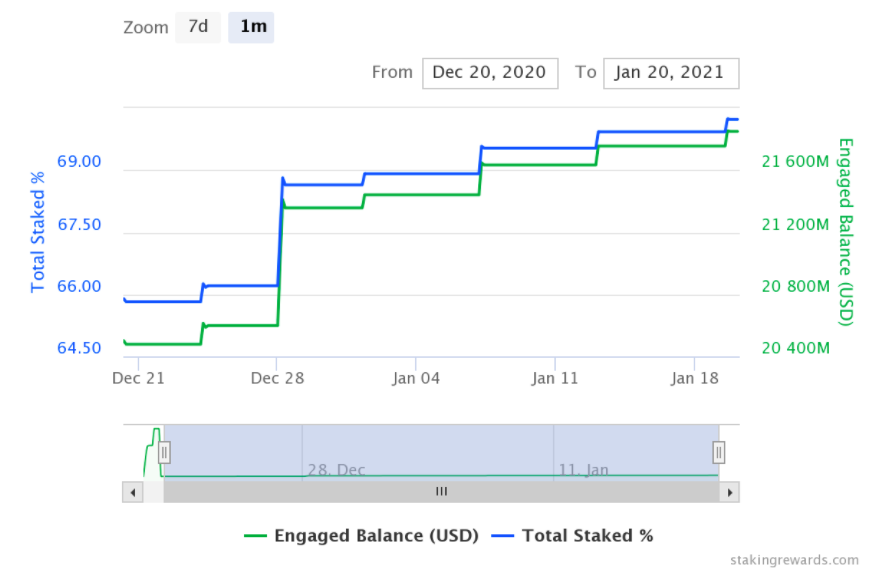 There are currently 1,468 active validators in the network serving a total of 140,130 delegators. The largest validation pool with 1.77% of the total ADA offering is delegated by 851 unique wallet addresses.

A sustained upward trend in the participation rate over the past month, as shown in the graph above, can lead to a further increase in prices as the number of ADA available for trading slowly decreases.