The US dollar lost about 7% of its value in 2020, while Bitcoin gained about 300% over the same period. As Bitcoin institutional adoption increases, U.S. companies can begin diversifying their treasury with other stores of value, and Bitcoin (BTC) has a good chance of collecting some of it.

As Bitcoin’s price consolidates and prepares for the next leg, some altcoins have risen due to strong fundamentals and high investor expectations for their upcoming products. Let’s look at three such tokens today.

The decentralized finance space has seen a boom in recent months, and the success of the protocols depends heavily on decentralized, fast, and reliable data sources. This is where the Band Protocol comes in. The cross-chain data oracle has announced several partnerships in the past few days, which shows that it is gradually expanding its market share.

The strong rally in stocks like GameStop, AMC and others has caught the attention of traders for the past few days. Band’s collaboration with the Injective Protocol to provide decentralized price oracles for various stocks to be supported on the decentralized derivatives platform could benefit the price of its native BAND token, as a successful integration would be followed by increasing demand.

Band isn’t limited to just providing price feeds for cryptocurrencies, forex, and commodities. Elrond and Band have further expanded their partnership to bridge the two networks and provide off-chain data for various applications being developed in the Elrond network. In addition to the usual price feeds, Band will also process data requests for sports, games, sports and much more.

Together with these, Band has also entered into partnerships with the Moonbeam Protocol, Nervos and Fantom in the last few days and expanded its existing partnership with CoinGecko.

The bulls pushed the price above the range on Tuesday, but the long wick on the day’s candlestick shows that the bears are aggressively selling at higher levels. This has pulled the price back into the above trading range.

Unless the bulls are giving up a lot of ground, another attempt to break beyond range is likely. The 20-day exponential moving average ($ 9.28) is up and the relative strength index (RSI) is in positive territory, suggesting that the path of least resistance is up.

Contrary to this belief, if the bears successfully defend the $ 11.50-12.949 resistance zone, the pair can add a few days to their stay within range.

The GameStop saga and the trading restrictions that brokers like Robinhood have placed on retailers have exposed their significant shortcomings. This is likely to lure traders to decentralized exchanges where control is not with a centralized entity.

Transaction fees are an extremely important consideration in trading, especially for smaller traders. So if Ethereum’s gas fees rise, these retailers will be hardest hit. Loopring tries to solve this problem with layer two scaling.

Data from Dune Analytics shows that Loopring’s billing has recently surged to its highest ever level due to the increase in volume. The protocol recently updated its LRC tokenomics model and announced a new fee distribution pattern to its various subscribers. This could further attract LRC investors who may wish to take advantage of the protocol’s increasing popularity.

The uptrend is currently facing resistance near $ 0.55 and the LRC / USD pair could hit the 20-day EMA ($ 0.43). This is an important level to watch out for as the pair has already received assistance from the 20-day EMA three times.

This bullish view will be invalidated if the bears sink and hold the price below the 20-day EMA. Such a move suggests that the bulls are no longer buying the dips and this could lead to a fall to $ 0.35 and then to the 50-day simple moving average ($ 0.31).

Certain aspects of traditional funding could serve as inspiration for building projects in the decentralized space. Cream Finance recently announced the launch of Iron Bank, led by the success of the US corporate debt market of $ 10 trillion.

While there are multiple peer-to-peer lending protocols in place in the crypto room, Cream has gone a step further and developed a protocol-to-protocol lending mechanism. The main attraction of the iron bank is that it makes it easy to lend without collateral.

To keep the risk under control, Cream sets a credit limit according to the whitelist of the logs. Initially, the iron bench is only available to Cream’s partners. However, if this project is successful, it will likely be a huge benefit for the entire DeFi space.

In other news, Cream recently expanded its services by adding SushiSwap and Uniswap LP tokens as collateral options for lending and borrowing.

The platform’s CREAM token rose from $ 119.35 on Jan. 22 to an intraday high of $ 319.9 on Tuesday, a 168% rally over a short period of time. The long wick on the candlestick of the day shows that traders were aggressively posting gains at higher levels. 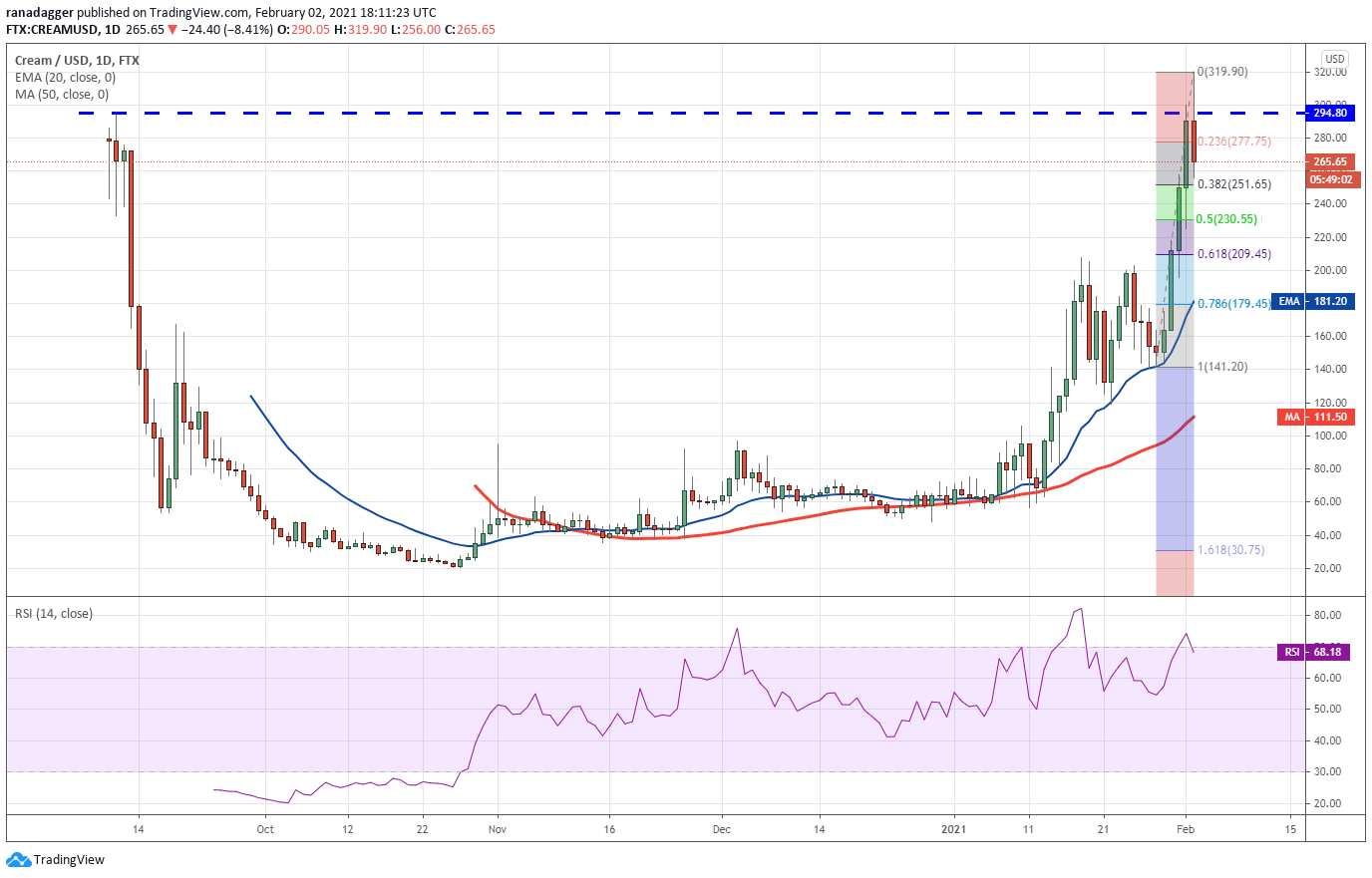 If the bulls do not allow the price to drop below the 38.2% Fibonacci retracement level at $ 251.65, it indicates accumulation at lower levels. The rising 20-day EMA (USD 181) and the RSI near the overbought zone indicate the advantage for the bulls.