Bitcoin (BTC) price spent the day trading in a narrow range between $ 32,000 and $ 34,000. At the time of writing, the digital asset is below the descending trend line resistance and any attempt to exceed it will be satisfied by selling.

Data from Cointelegraph Markets and TradingView show a 4.14% price increase for the top cryptocurrency, currently trading at $ 33,840.

Given the sideways price movement, Ki Young Ju, the CEO of cryptocurrency analysis firm CryptoQuant, spotted a potential bullish indicator that could point to a price breakout for Bitcoin in the near future.

More than 15,000 bitcoin were recently withdrawn from Coinbase Pro, according to Ju, with the outflows “going to custody wallets where only inbound transactions take place,” indicating that the purchases were likely “OTC deals from institutional investors.” . Rallies have followed similar outflows in the past, and Ju sees this as a sign that BTC “will protect $ 33,000 in the short term”.

The financial markets are still preoccupied with the antics of r / Wallstreetbets who expanded into the cryptocurrency sector via r / Satoshistreetbets and helped usher in the recent price increases for Dogecoin (DOGE) and now XRP.

In other news, Kraken Cryptocurrency Exchange joined Grayscale Investments in defending against the proposed FinCEN self-hosted wallet rule and the US government’s STABLE Act.

The exchange pledged $ 100,000 to Coin Center, a Washington DC-based cryptocurrency advocacy group that focuses on educating regulators about digital assets while promoting the rights of crypto users.

Traditional markets grew in most sectors, which helped offset some of the January 29 losses. The S&P 500, Dow and NASDAQ all benefited from the positive price development on February 1st, closing the day up 1.61% and 0.76% respectively. and 2.5%, respectively.

As announced over the weekend, members of the r / Wallstreetbets investment group focused on the precious metals market, pushing silver futures above USD 30, the highest price level since 2013.

The market has cooled slightly since then and SLV is currently trading at $ 29.07.

The decentralized exchange is the focus

DeFi-related tokens continue to do well as the battle between Uniswap and Sushiswap intensifies and the top two DEXs see increased trading volume and a sharp appreciation in the price of their domestic tokens. 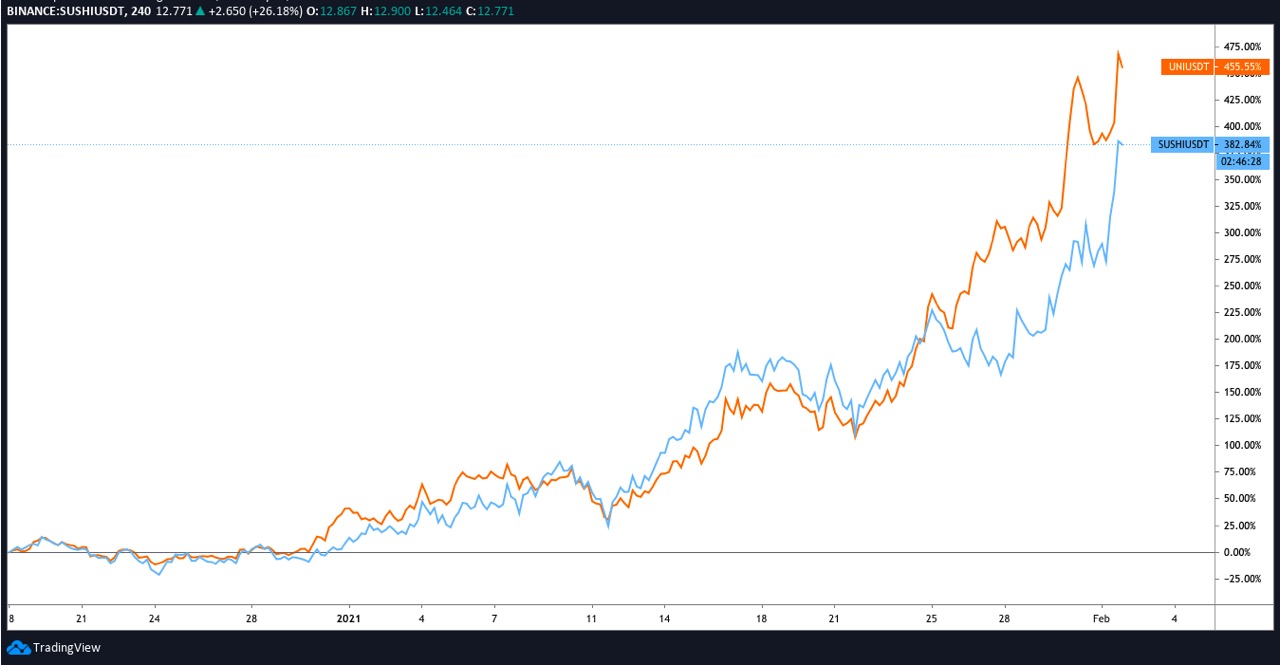 The market capitalization for cryptocurrencies is currently around $ 1 trillion, and Bitcoin’s dominance rate is 62.5%.