In an interview with Bloomberg, Michael Sonnenshein, CEO of Grayscale, said that in addition to hedge funds, pension funds and foundations have also started to invest in the Grayscale product family. This suggests that a wide range of institutions are accumulating Bitcoin (BTC).

As this trend gains traction, investment banks have also decided that they don’t want to be left behind. A recent announcement filed by Morgan Stanley shows the purchase of a 10.9% stake in business intelligence firm MicroStrategy, a move likely to have been made to gain exposure to Bitcoin. With 70,470 Bitcoin in their possession, MicroStrategy has become a proxy game for Bitcoin.

While there have been positive reports of institutional buying, traders should also keep an eye on the people who have sold as the rally will eventually lose momentum and investors will seek to make a profit.

Analysts at Material Indicators believe that mega-whales may have made gains on Jan. 7 when Bitcoin hit $ 40,000, and further whale sales could also be the reason for the drop in prices seen today. However, aggressive buying at lower levels resulted in a strong rebound.

But that didn’t stop the whales from selling. Bitcoin whales in South Korea have dumped their positions in the past few days, as evidenced by multiple deposits of $ 100 million on exchanges. While the sale has not caused a massive rush to exit, traders should be careful with their positions because even if a few big US investors rush to exit it could result in a sharp decline.

If Bitcoin corrects sharply, most altcoins will likely follow suit. However, if Bitcoin stays strong, these top 5 cryptocurrencies could outperform in the short term.

Let’s analyze your graphs to identify the critical levels to watch.

Bitcoin has been in a strong uptrend for the past few weeks, but the rally has pushed the relative strength index (RSI) into overbought territory. While the markets can remain overbought for a long time, the risk of a sharp correction increases with each rise.

The initial support to the downside is the January 8th intraday low at $ 36,518.73. If the price rebounds from this level, it suggests that traders are not booking profits in a rush and buying with minor drops.

This is important support for monitoring as a crack can panic multiple traders and lose their positions, which can result in a deeper correction to the 61.8% retracement level at $ 27,167.10. 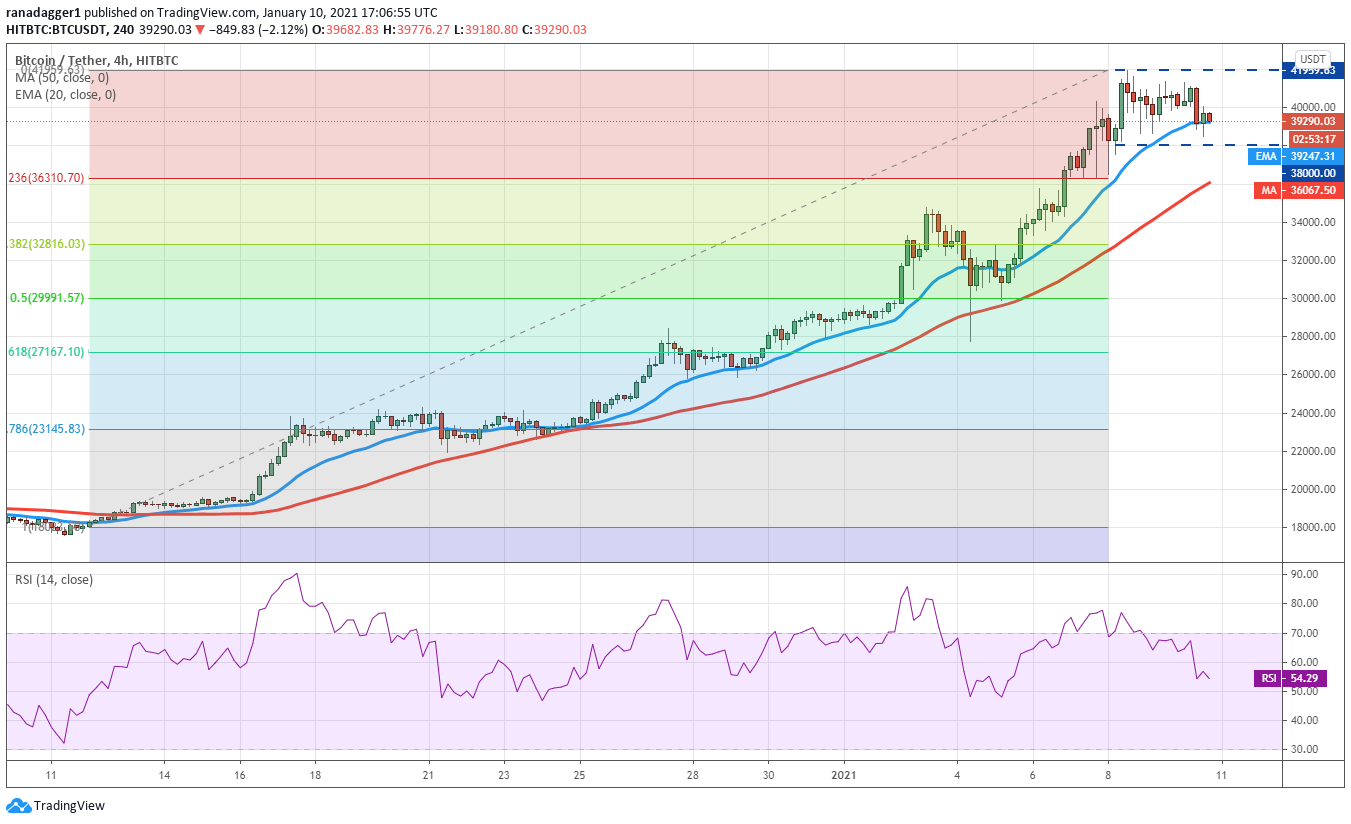 Conversely, if the bears drop the price below the range’s support, it suggests that the traders post a profit.

The next down move is the 50 simple moving average, which has not been significantly breached in previous corrections in this section of the uptrend. If this support is cracked, it signals a possible change in trend.

Cardano (ADA) is currently consolidating in an upward trend. The altcoin has been stuck between $ 0.2632811 and $ 0.3542857 for the past few days, pulling the RSI down from heavily overbought levels. 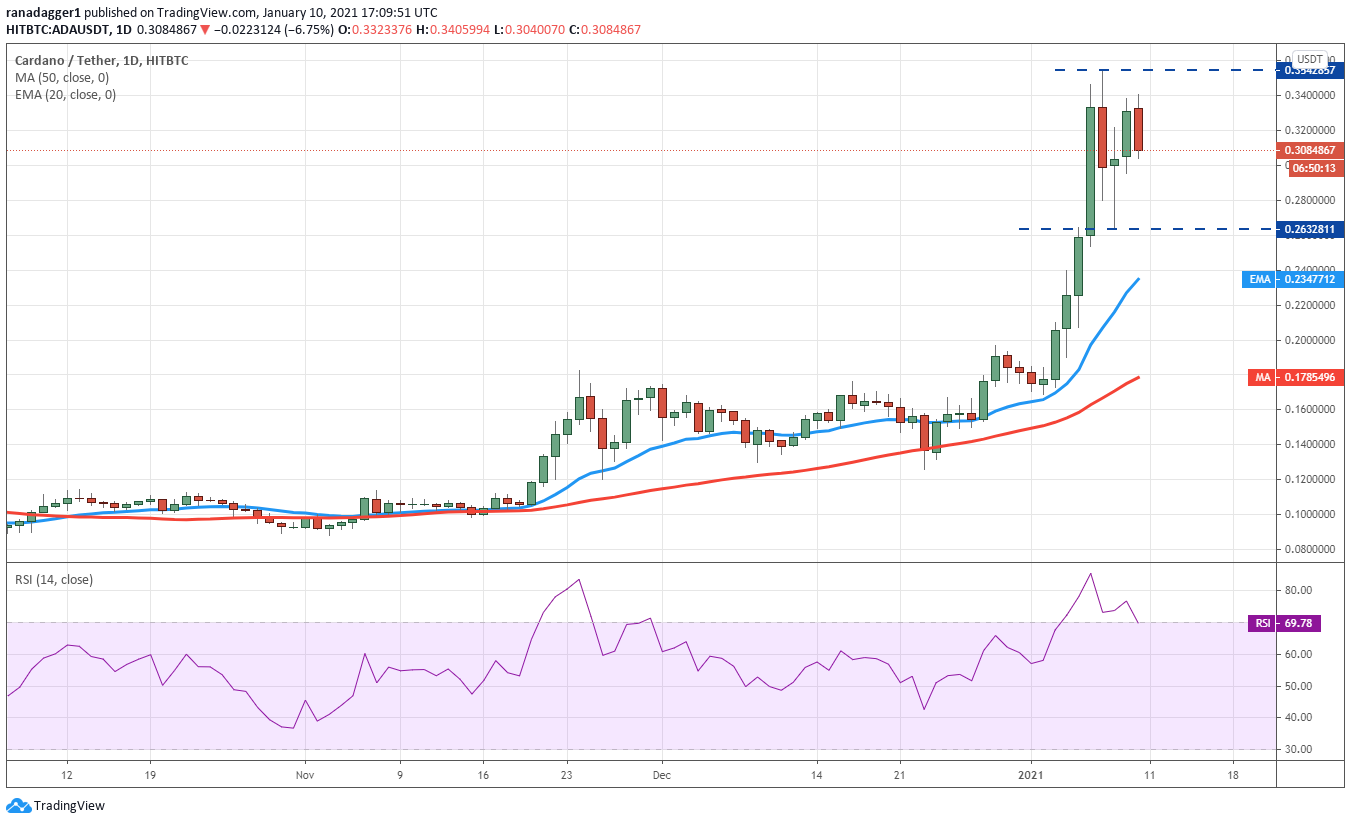 The bulls are currently facing strong resistance near the $ 0.34 level, but a positive sign is that there are no signs of panic selling yet. If the bulls can push the price above the overhead resistance, the next part of the uptrend could resume.

The ADA / USD pair has a target of $ 0.449, but the bears are likely to build stiff resistance near $ 0.40. However, if the bulls can push the price above the resistance level, the pair could move to the psychological level at $ 0.50.

This bullish view will be invalidated if the pair rejects and breaks below the 20-day EMA ($ 0.234). Such a move suggests that the uptrend may have subsided. 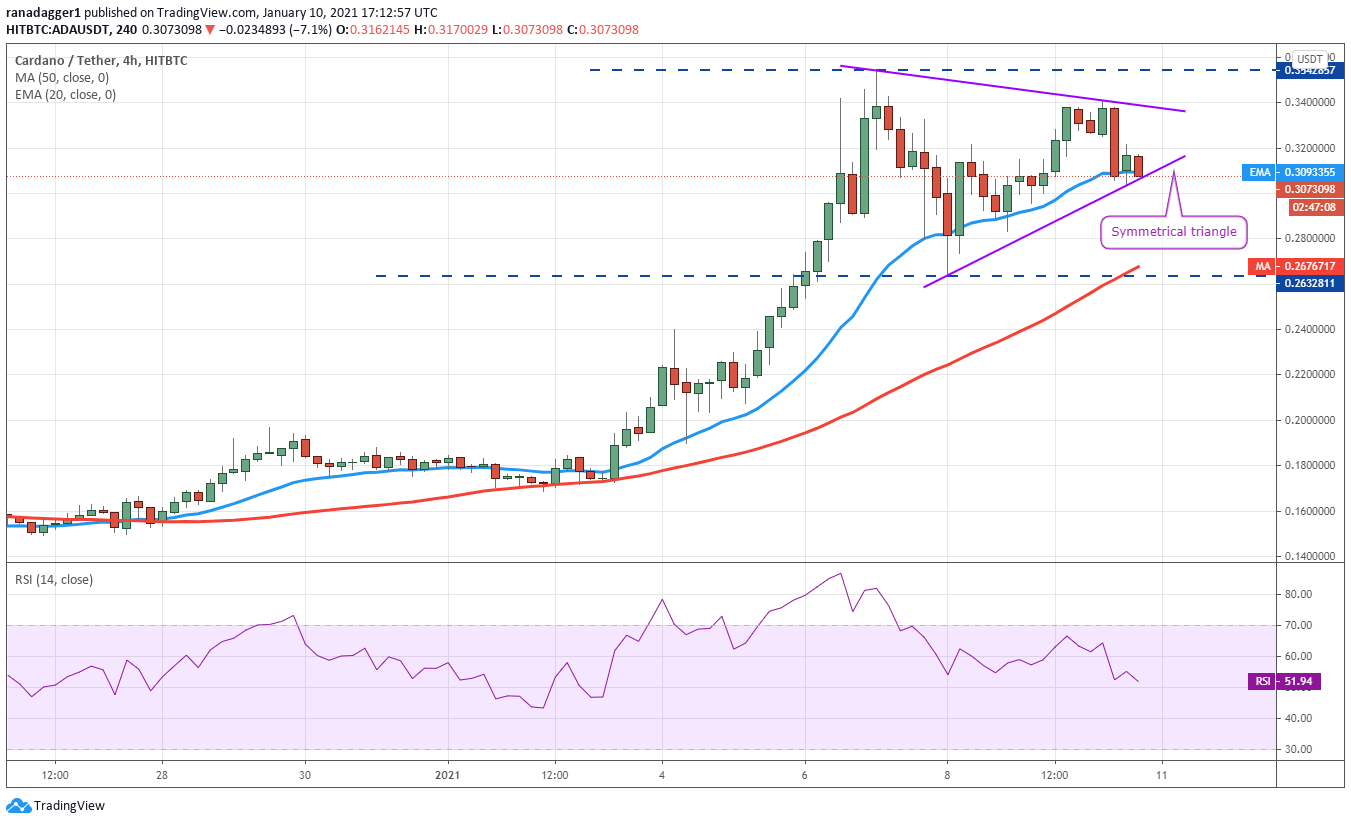 The 4 Hour Chart shows the formation of a symmetrical triangle that usually acts as a continuation pattern. The bulls are currently trying to defend the 20-EMA. If price bounces off current levels, the bulls will attempt to push the pair above the triangle.

If successful, the pair can rise to $ 0.525. However, if the pair breaks below the triangle, the next support is at 50 SMA. However, if that support breaks too, the decline could extend to $ 0.20.

EOS traded in a wide range between $ 2.20 and $ 3.949. The altcoin was heavily opposed to the overhead resistance today, which shows aggressive selling by the bears. 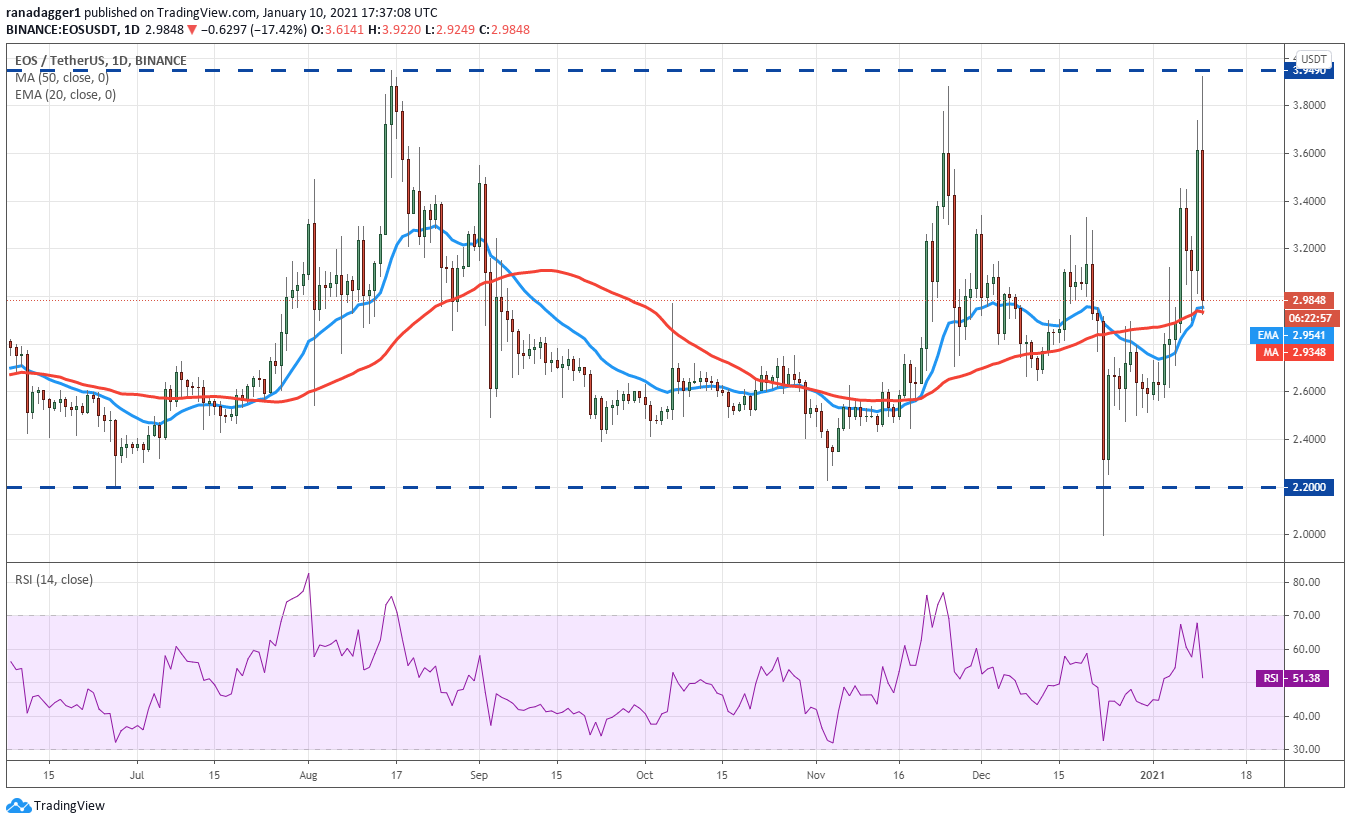 However, if the bulls defend the moving averages, the EOS / USD pair could try again to hit the overhead resistance near $ 3.949. A breakout of this level indicates the beginning of a new uptrend that could hit $ 5.698.

This view will be invalidated if the bears decline and keep the price below the moving averages. Such a move could result in the USD 2.20 area support dropping and the pair potentially holding the area for a few more days. 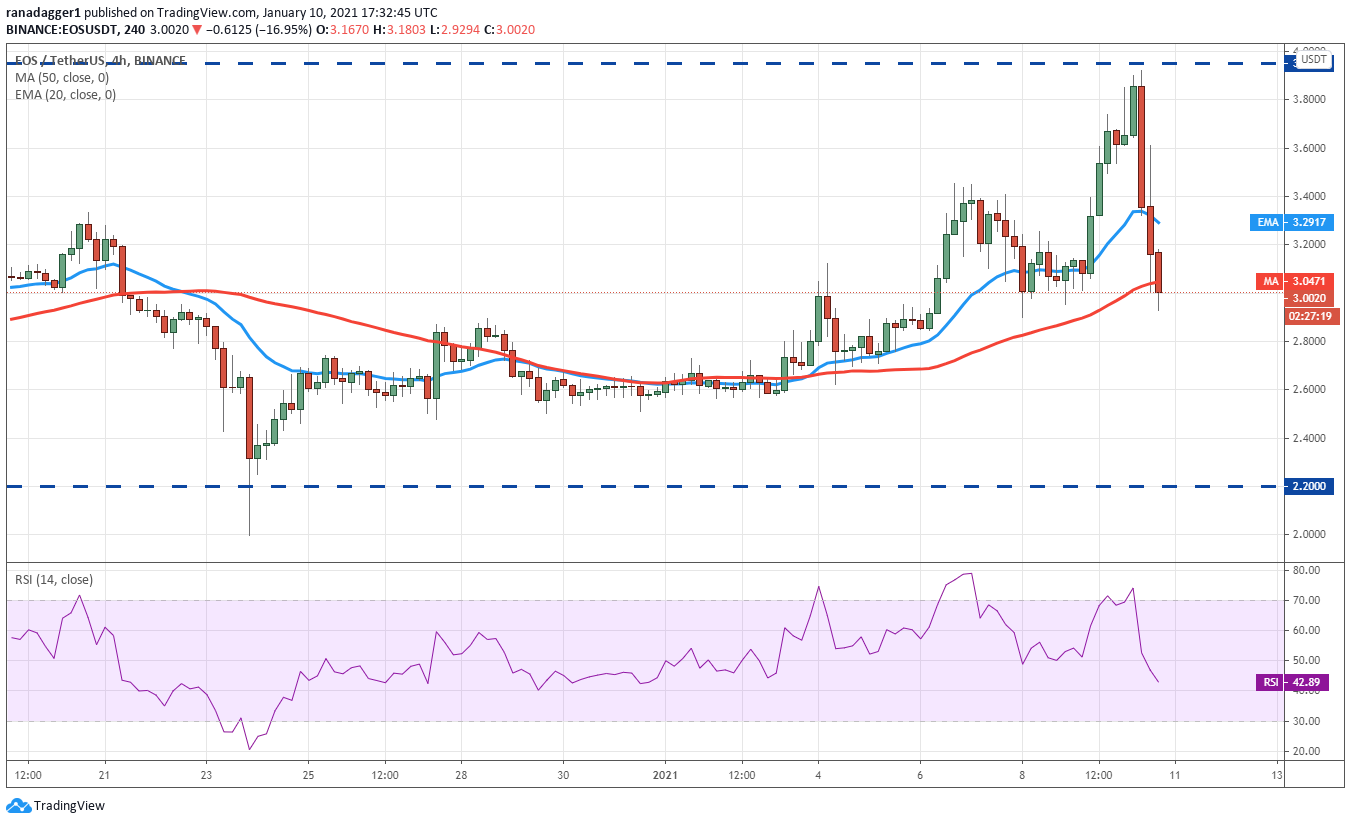 The 4-hour chart shows that the price has fallen sharply against the overhead resistance and has fallen below both moving averages. This suggests an aggressive sale by the bears.

However, if the price recovers from current levels and rises above the 20 EMA, it suggests that the sale may have ended. The bulls can then try again to carry the price to the overhead resistance.

THETA is currently consolidating in an upward trend in the last few days. The price has hit lower highs, suggesting any attempt at rally will come with selling the bears. 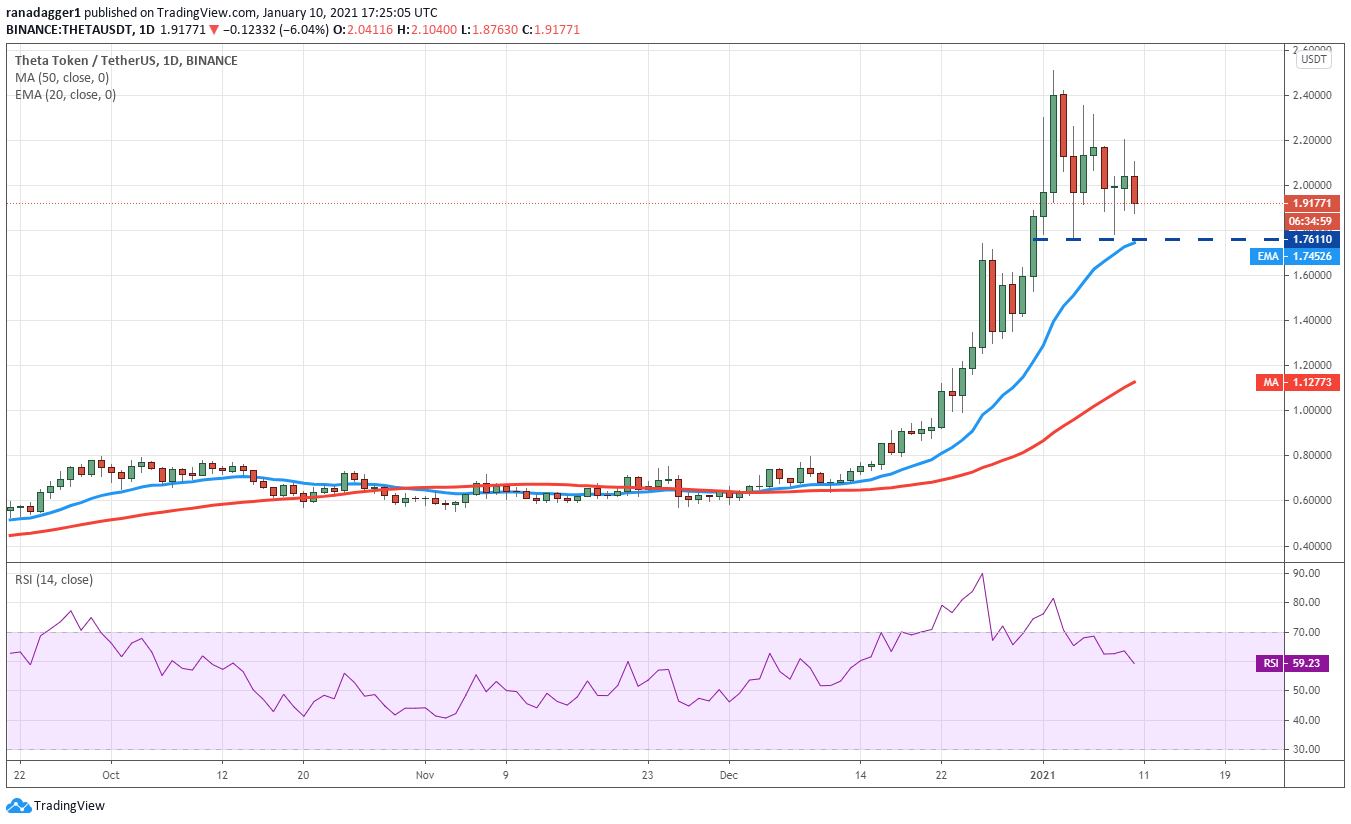 One small positive result, however, is that the bulls did not allow the price to drop below the $ 1.7611 support. The 20-day EMA ($ 1.74) is just below this level and the bulls are likely to aggressively defend it.

If the bulls can push the price above $ 2.20, the THETA / USD pair can rise to $ 2.51. The rising moving averages and the RSI in positive territory suggest that the bulls are in control. 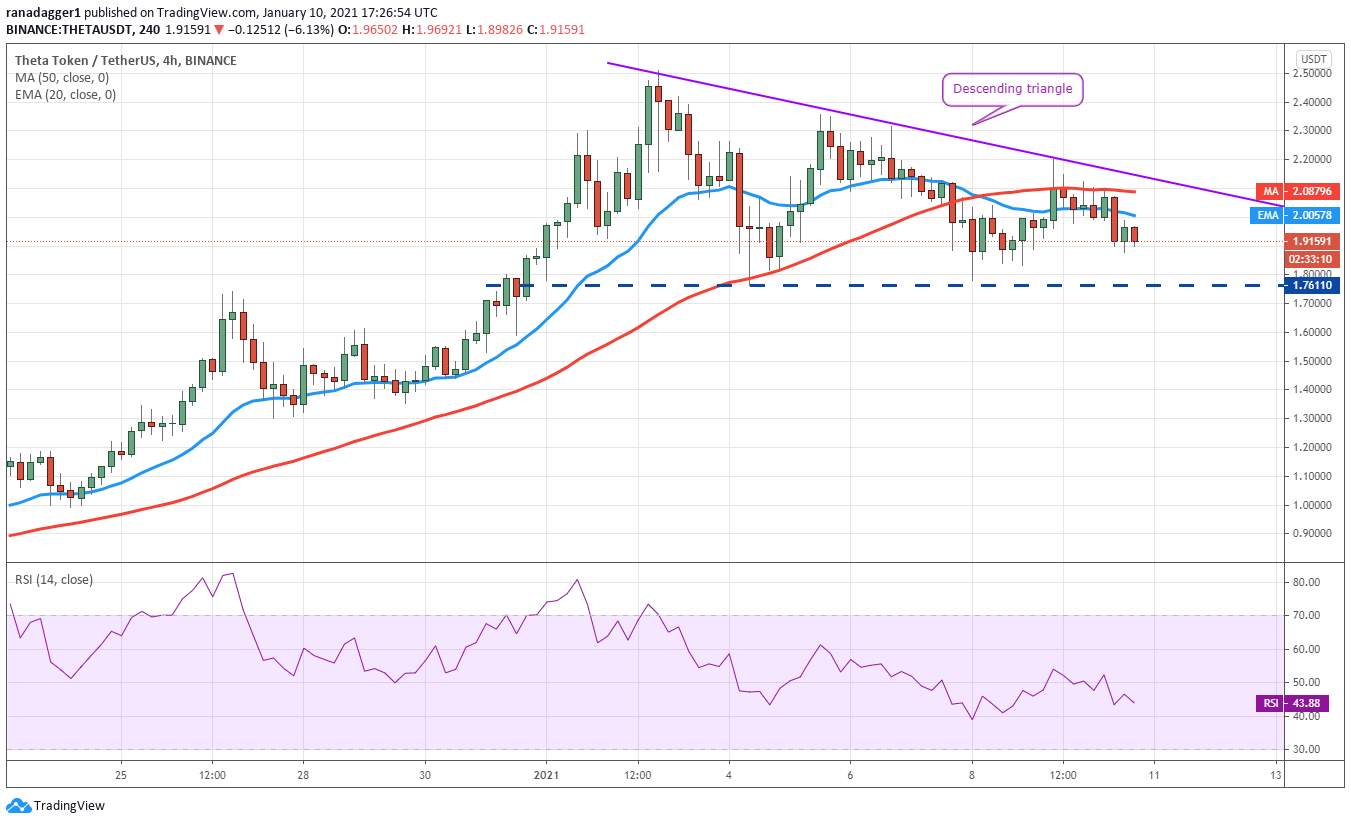 The 4-hour diagram shows a descending triangle formation. The flat moving averages and the RSI just below the midpoint suggest a balance between supply and demand.

If the bears can pull the price below $ 1.7611 and maintain it, the descending triangle pattern will complete and this could bring the price down to $ 1.01.

AAVE is currently in an uptrend as it continues to make higher highs and higher lows. However, the long wick on today’s candle holder shows that bears are selling aggressively at higher levels. 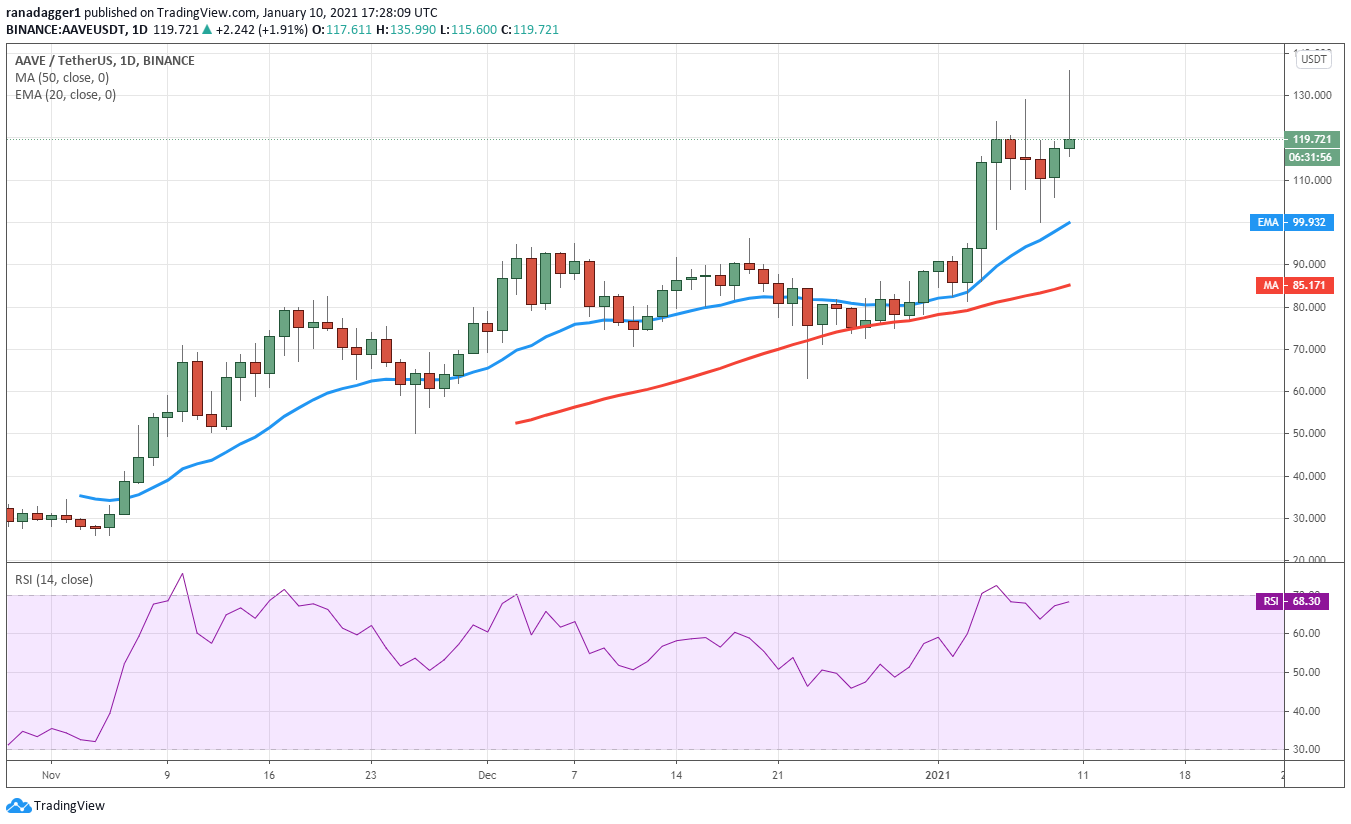 The rising moving averages and RSI near the overbought area suggest that the path of least resistance is up. If the AAVE / USD pair corrects further, a rebound in the 20-day EMA ($ 99.93) confirms traders will continue to buy on dips. 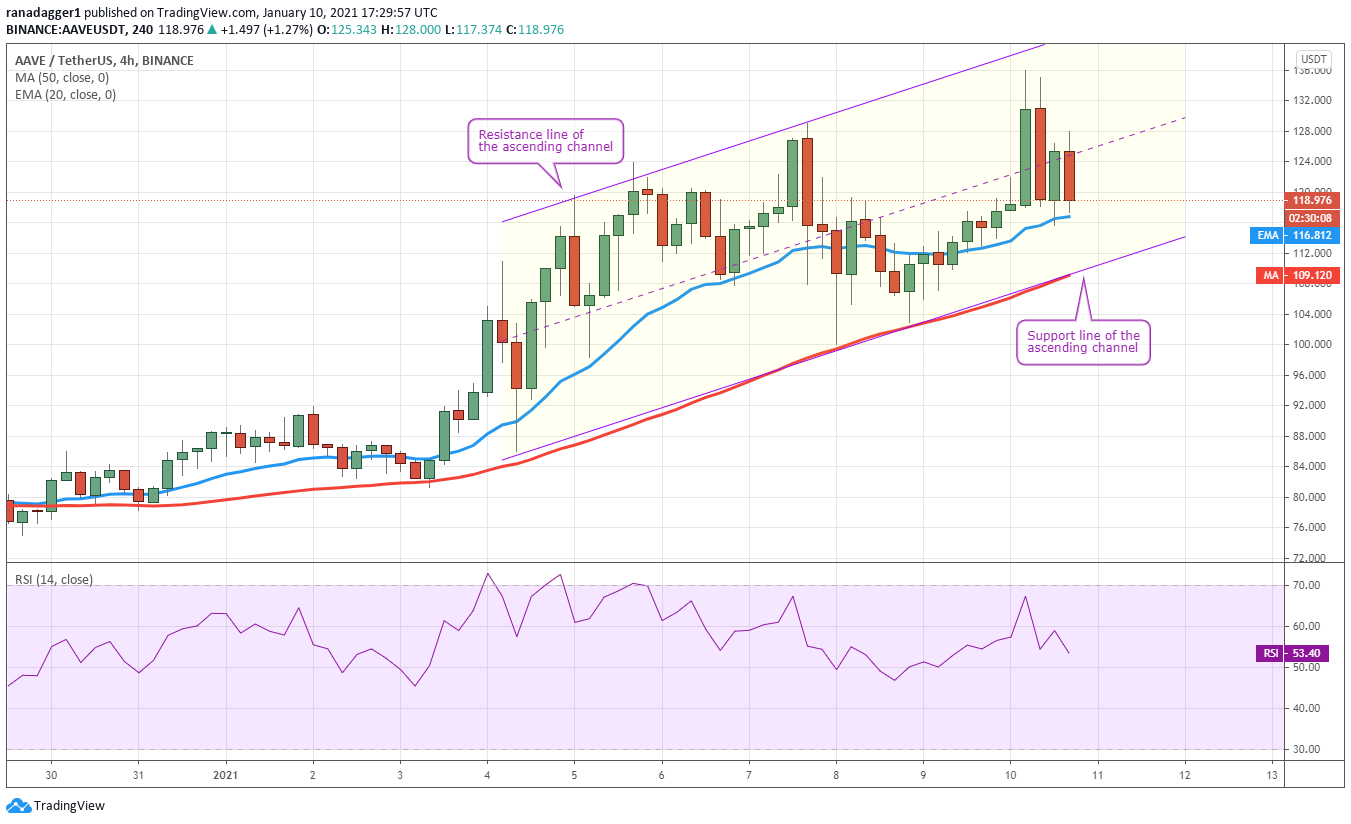 The 4 hour chart shows that the pair is trading within an upward channel. The bulls are currently trying to defend the 20-EMA. A strong rebound could take the price to the channel’s resistance line.

A break above the canal could cause a sharp upward movement. However, if the price deviates from the resistance line of the channel, the pair can trade within the channel for a few days.

If the price drops below the 20 EMA, the support line of the channel can drop. A strong rally in this support will keep the uptrend intact, but a break below it could signal a change in trend.