Bitcoin (BTC) price has corrected itself in the past few days and traders are excited to see whether this is a small pullback or the beginning of a deeper decline. The problem is, no one has a crystal ball and analysts can only point out critical levels of support that may apply based on historical data and evidence.

However, during a bear phase, price tends to drop below key support levels as traders panic and sell out of fear, much like price beating upward targets during a bull run when traders buy due to FOMO.

March has historically been a weak month for Bitcoin, suggesting that seasonal traders would rather wait and watch than jump to buy at dips. This lack of demand could be one of the reasons why Grayscale Bitcoin Trust’s premium has plummeted over the past week.

Not all data is bearish, however. On February 26, Lex Moskovski, CEO of Moskovski Capital, pointed out that the Bitcoin miners’ positions turned positive on February 26 for the first time since December 27. On top of that, CryptoQuant CEO Ki Young Ju said the large Coinbase outflows in recent days suggest that institutions are still piling up at lower levels.

This data does not seem conclusive and does not provide an immediate picture of whether the advantage is with the bulls or the bears. Let’s examine the charts of the top 5 cryptocurrencies that could outperform in the next few days.

Bitcoin has broken below the 20-day exponential moving average ($ 47,441), which is the first indication that a deeper correction is beginning. The next major support is the 50-day simple moving average of $ 41,066. The price has not closed under this support since October 9th, so the level is gaining importance. 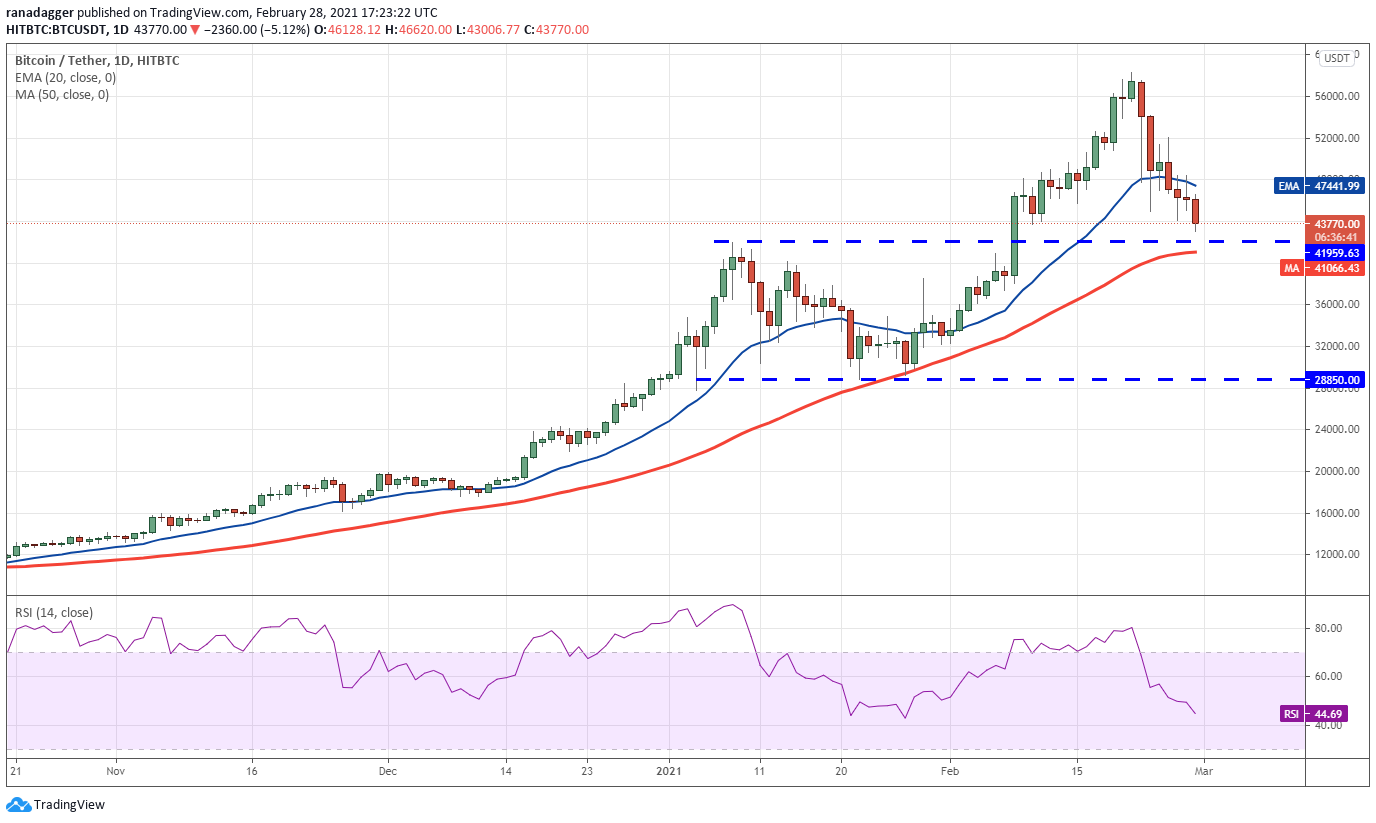 The bulls are likely to aggressively defend the 50-day SMA. If the price recovers from this support and rises above the 20-day EMA, it suggests that sentiment will remain bullish and traders will buy on dips.

However, the flat moving averages and the relative strength index (RSI) just below the midpoint suggest that the bulls are losing their grip.

If the bears pull the price below the 50-day SMA, it means supply has exceeded demand and traders are rushing to make profits. Such a move could bring the price down to the February 8 intraday low of $ 38,000. 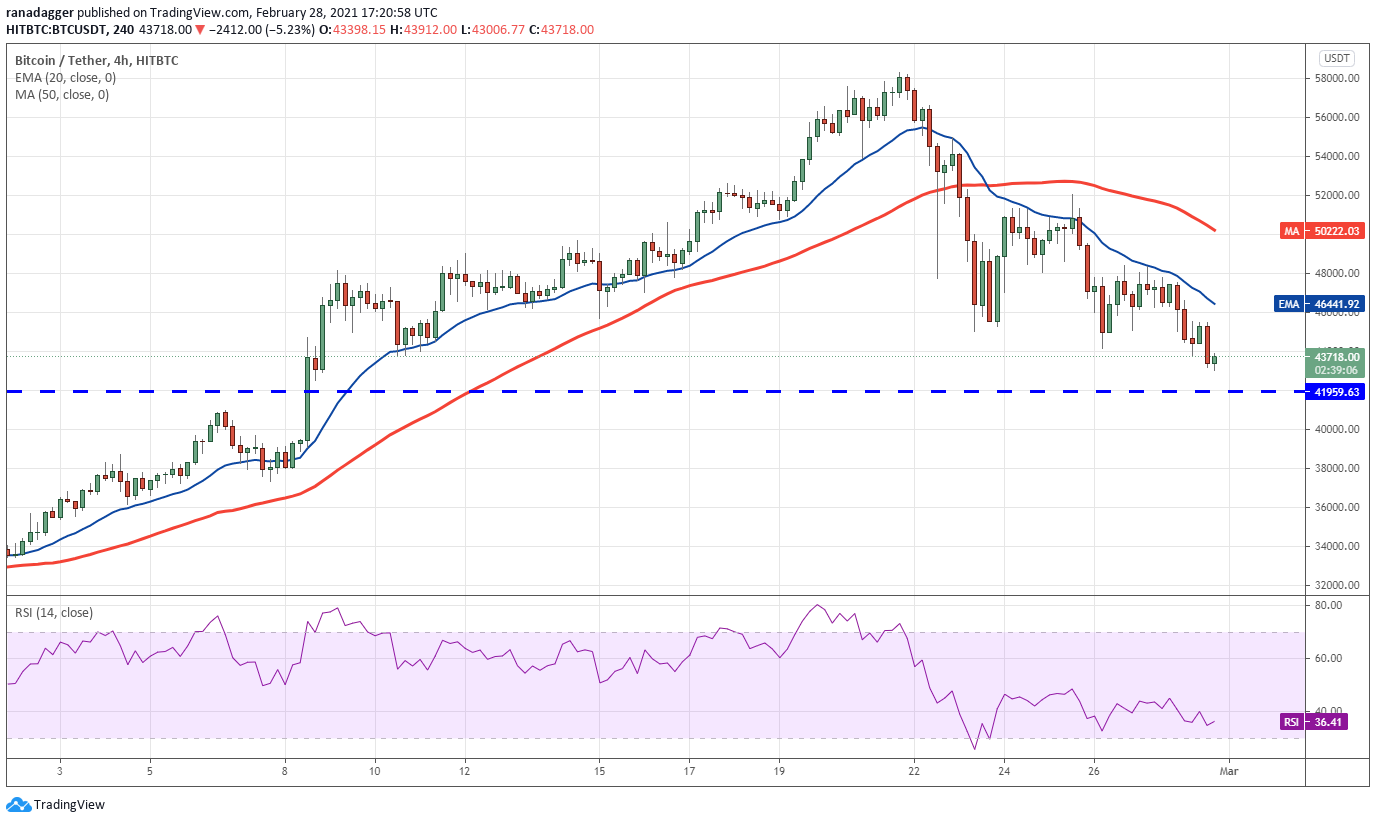 The falling 20 EMA and the RSI in the negative zone suggest the bears are in control. The price is now approaching the critical support at $ 41,959.63.

When the price recovers from this support, the bulls will seek to push the price above the 20-EMA. If they are successful, it suggests that bulls are aggressively accumulating the break-ins. The BTC / USD pair can then soar to 50 SMA and then to 52,000 USD.

Conversely, a deeper correction is likely if the USD 41,959.63 support breaks and the bears place it on resistance.

Binance Coin (BNB) has been in a correction phase since February 20th, which shows that traders are posting profits after the strong uptrend on February 19th. However, the pace of the decline has been gradual since Feb.25, indicating that traders shouldn’t panic. 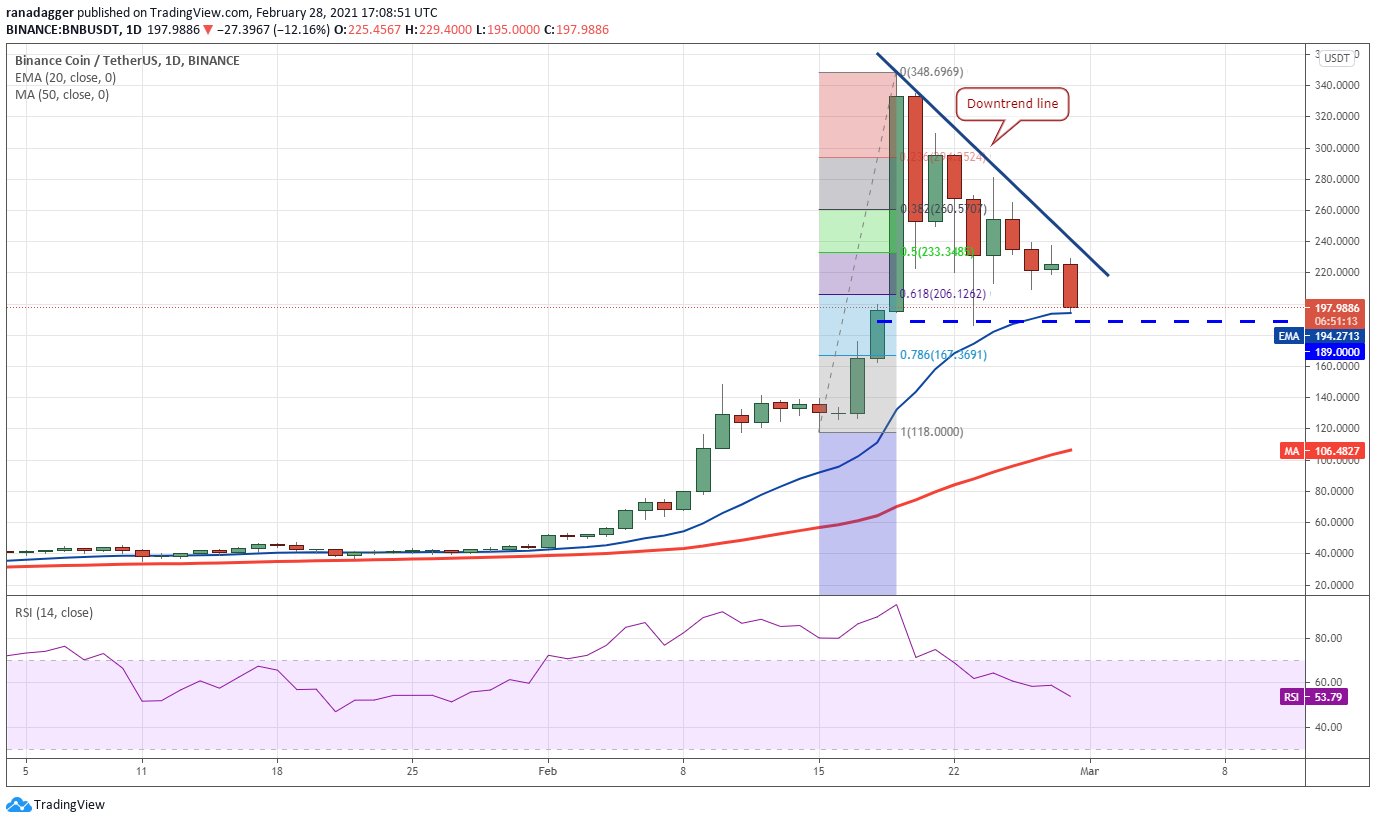 The price has currently dropped to the 20-day EMA ($ 194) which buyers may step in for. If price bounces off this support and crosses the downtrend line, the BNB / USD pair could again attract buying from short-term traders. That could push the price down to $ 280 and then to $ 300.

The 20-day EMA has flattened and the RSI is just above mid-point, indicating a balance between supply and demand. However, if the bears are sinking and holding the price below the 20-day EMA, it suggests that supply is outstripping demand. The pair could then correct to $ 167.3691 and then to $ 118. 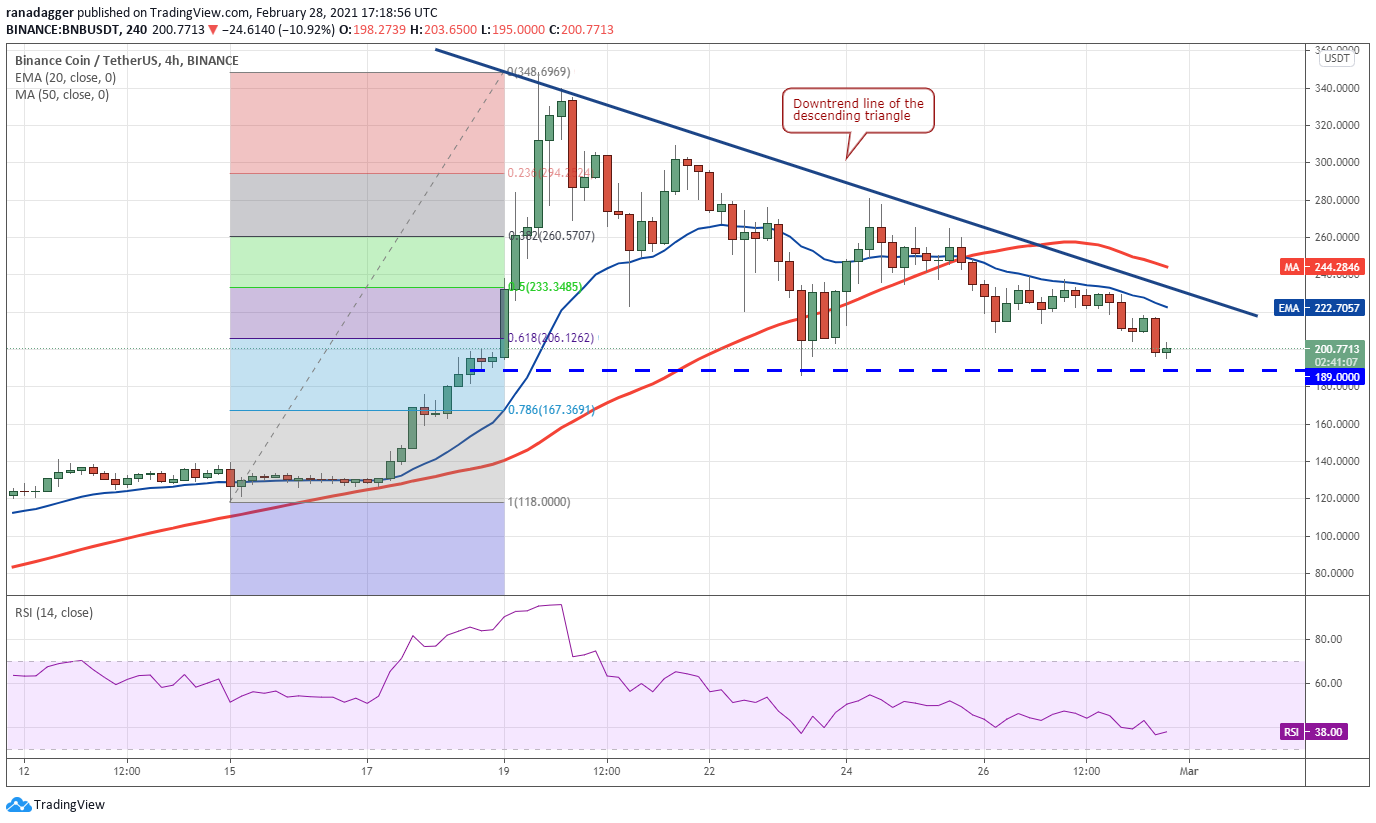 The 4 hour chart shows the formation of a descending triangle pattern that completes on a breakdown and closes below $ 189. In this case, it suggests the upside is in and the pair could then fall to $ 118.

Conversely, if the bulls are defending support at USD 189, it suggests that sentiment remains positive as the bulls buy on a break to strong support levels. A breakout and close above the downtrendline will invalidate the bearish setup and this could result in a rally to USD 280.

Polkadot (DOT) corrects in an uptrend. The long tail on the February 23-26 candlestick suggests the bulls are trying to defend the 20-day EMA ($ 30.49). However, the long wick in the February 27 rebound shows that demand is drying up at higher levels. 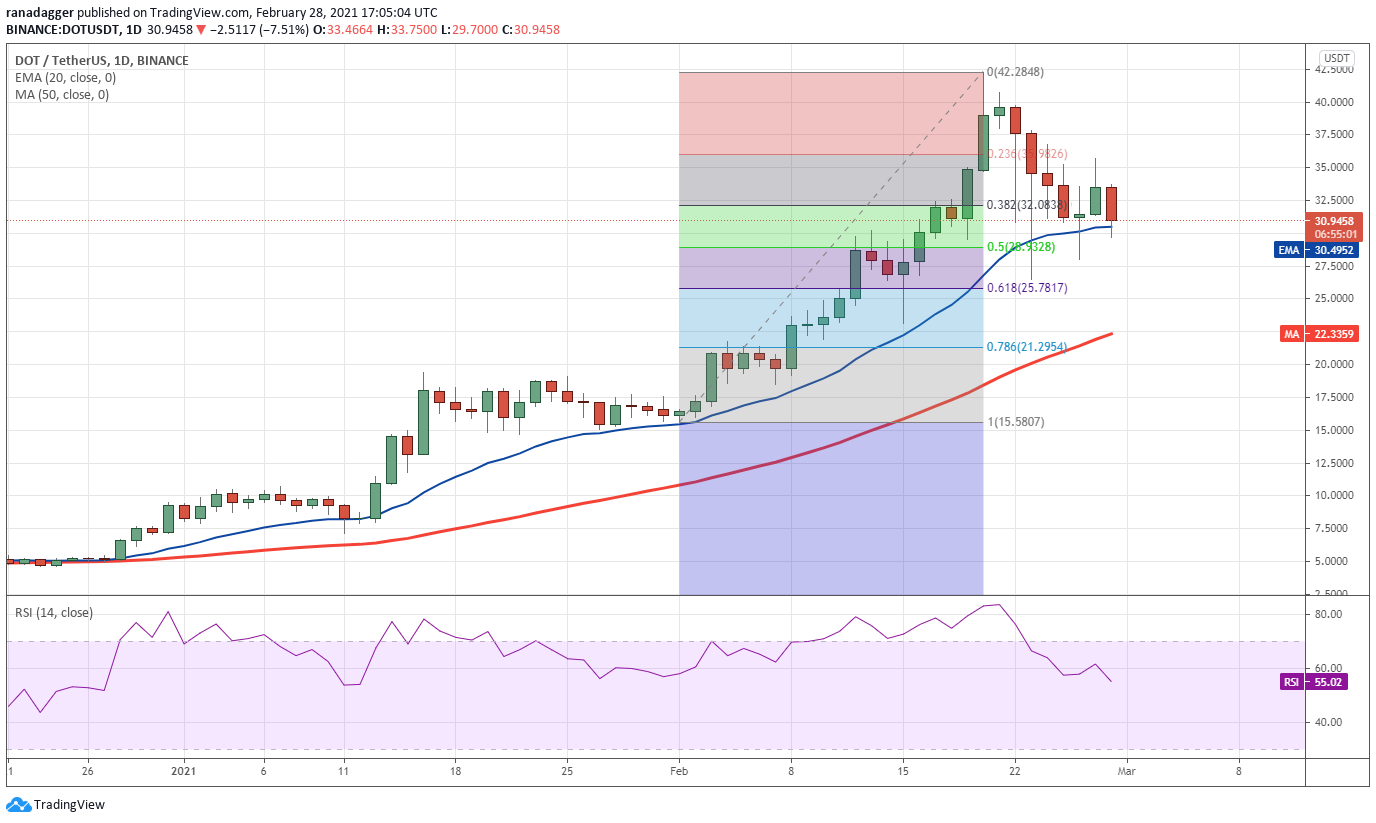 The 20-day EMA is flattening and the RSI is falling towards the center, suggesting that upside momentum is easing. However, during the recent bull run, the DOT / USD pair has received repeated support from the 20-day EMA. 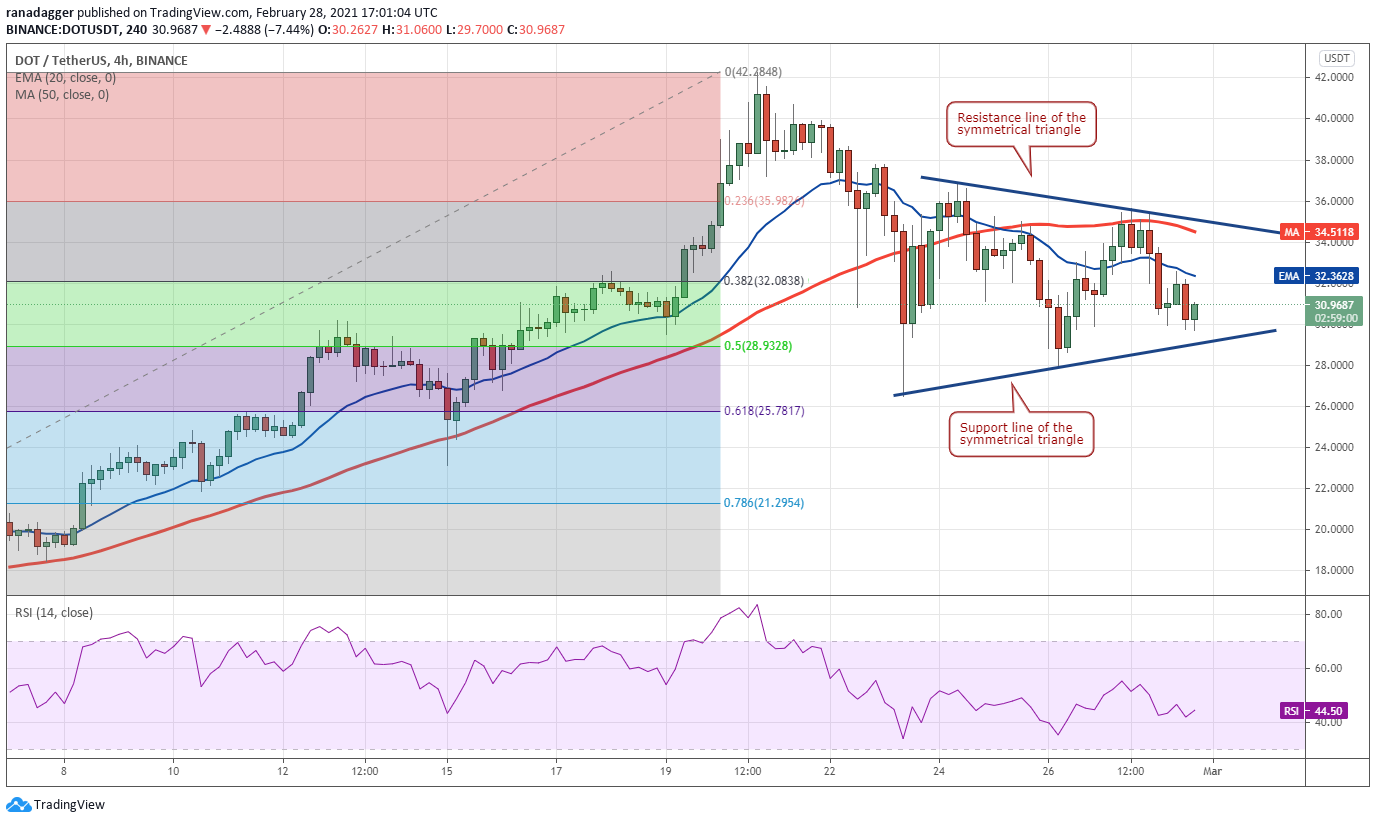 The 4-hour chart shows that the price is currently trading in a symmetrical triangle. If the bears can pull the price below the triangle’s support line, the pair could fall to $ 25.7817 and then to the pattern target at $ 18.70.

The decline in the 20-EMA and the RSI in negative territory suggests little advantage for the bears in the short term. However, if the price recovers from current levels, the bulls will attempt to push the price above the triangle. If successful, the pair can rise to $ 42.2848.

The bulls defended the 20-day EMA ($ 0.475) on Feb.26, indicating that sentiment remains positive and traders buy on dips. The bulls are currently trying to resume the uptrend in NEM (XEM). 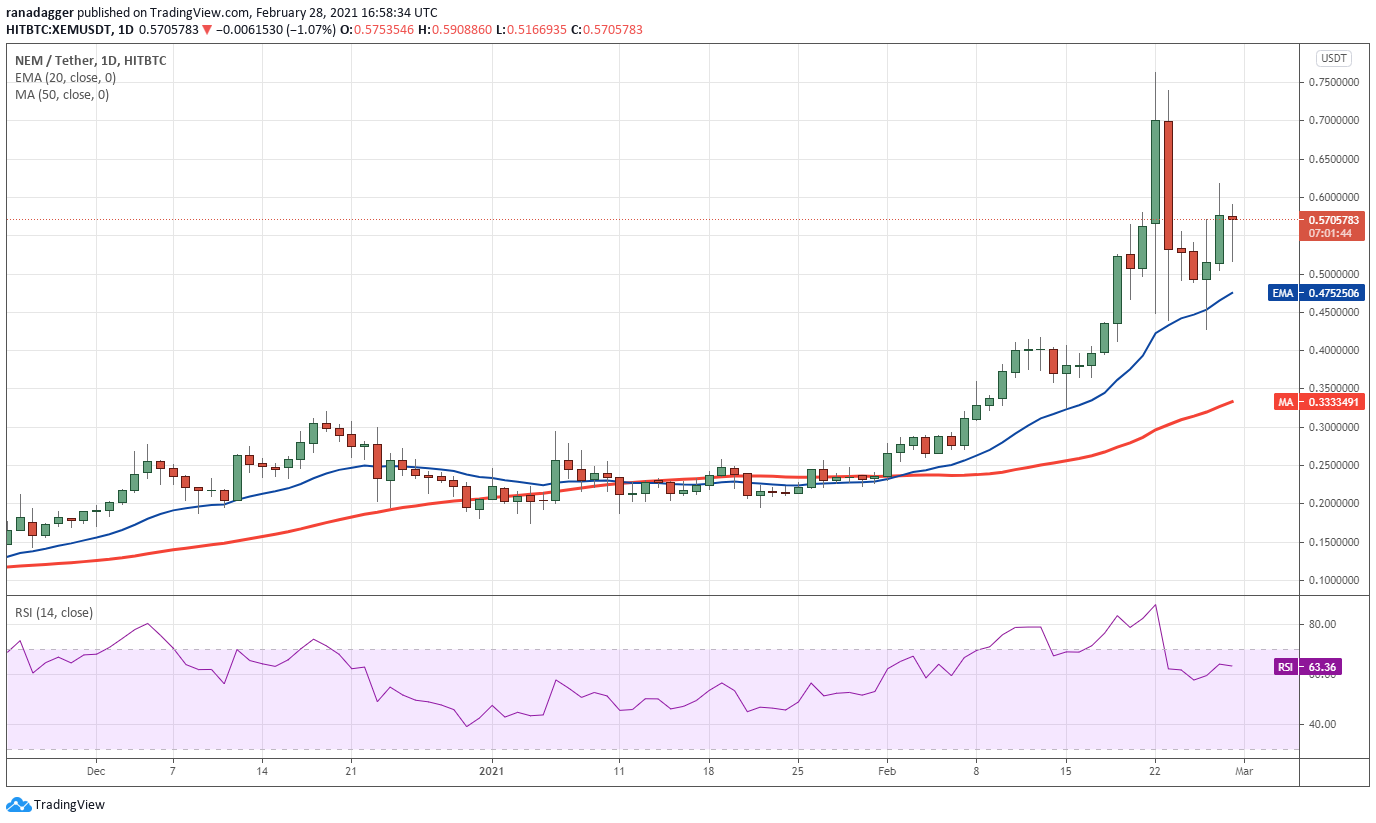 Contrary to this assumption, if the price drops from $ 0.5051, the pair may consolidate for a few days before the next trend move begins. A pause and close below the 20-day EMA suggest the beginning of a deeper correction. 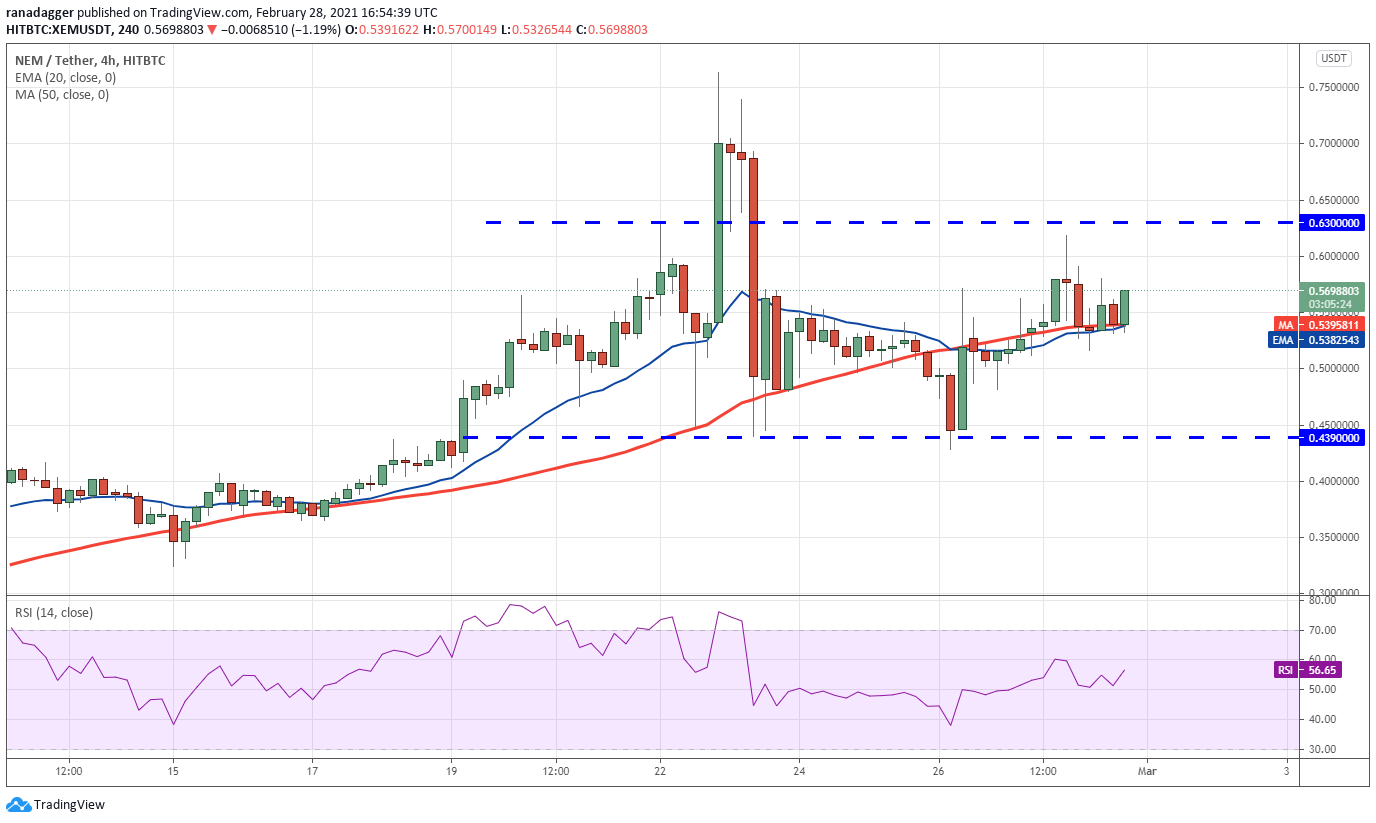 The 4-hour chart shows that the price has stuck between $ 0.439 and $ 0.63 for the past few days. Both of the moving averages are rolling up marginally and the RSI is just above mid-point, suggesting a small advantage for the bulls.

MIOTA has been in a correction phase since the high of $ 1.554775 on February 19th. While the pullback has been strong, the positive sign is that the bulls have successfully defended the 20-day EMA ($ 1.09) for the past few days. 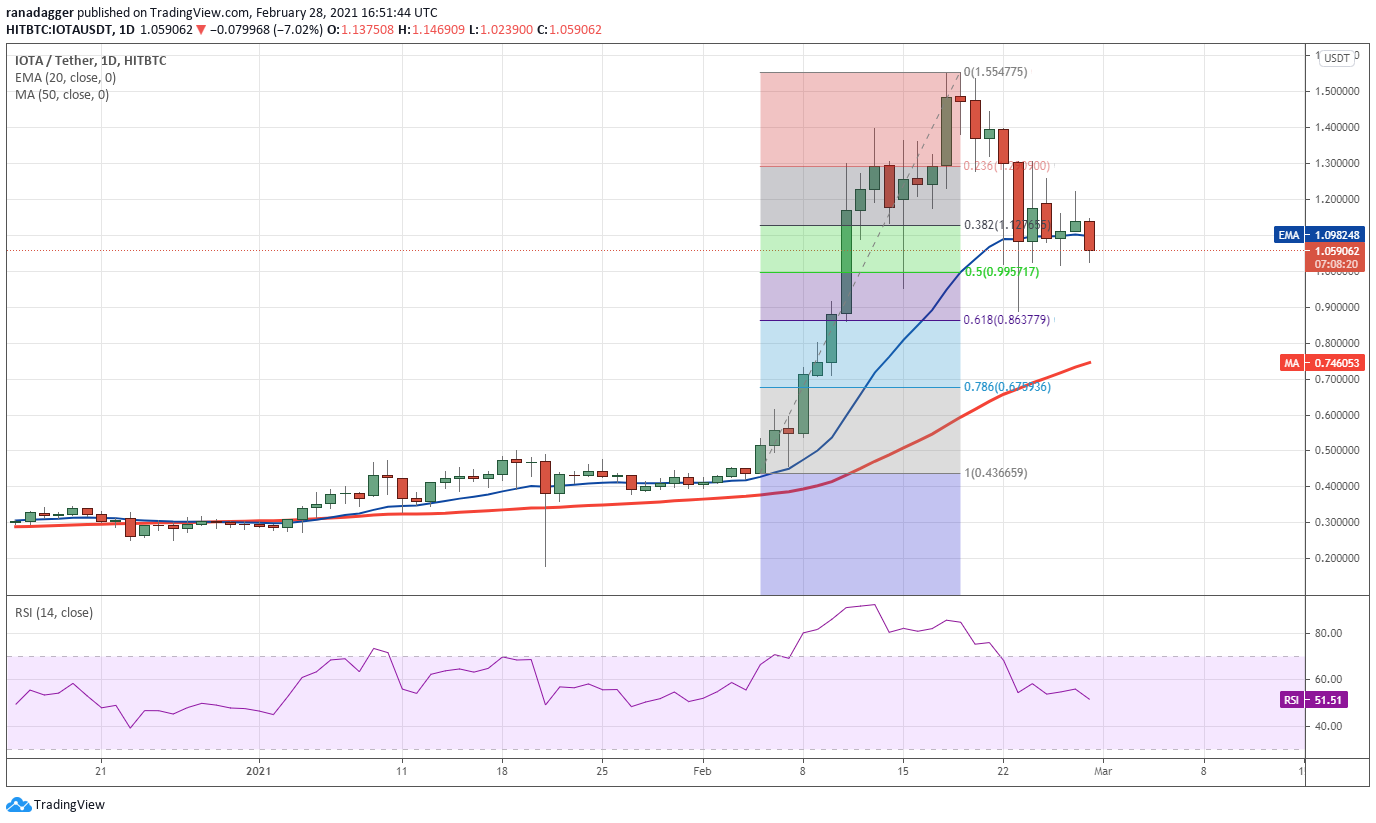 The 20-day EMA has flattened and the RSI is also trading just above mid-point, indicating a balance between supply and demand. Attempts by the bulls and bears to maintain their supremacy have failed in the last few days.

That equilibrium could shift in favor of the bulls if they can push and hold the price above the overhead resistance of $ 1.30. In such a case, the MIOTA / USD pair can rise to $ 1.554775. 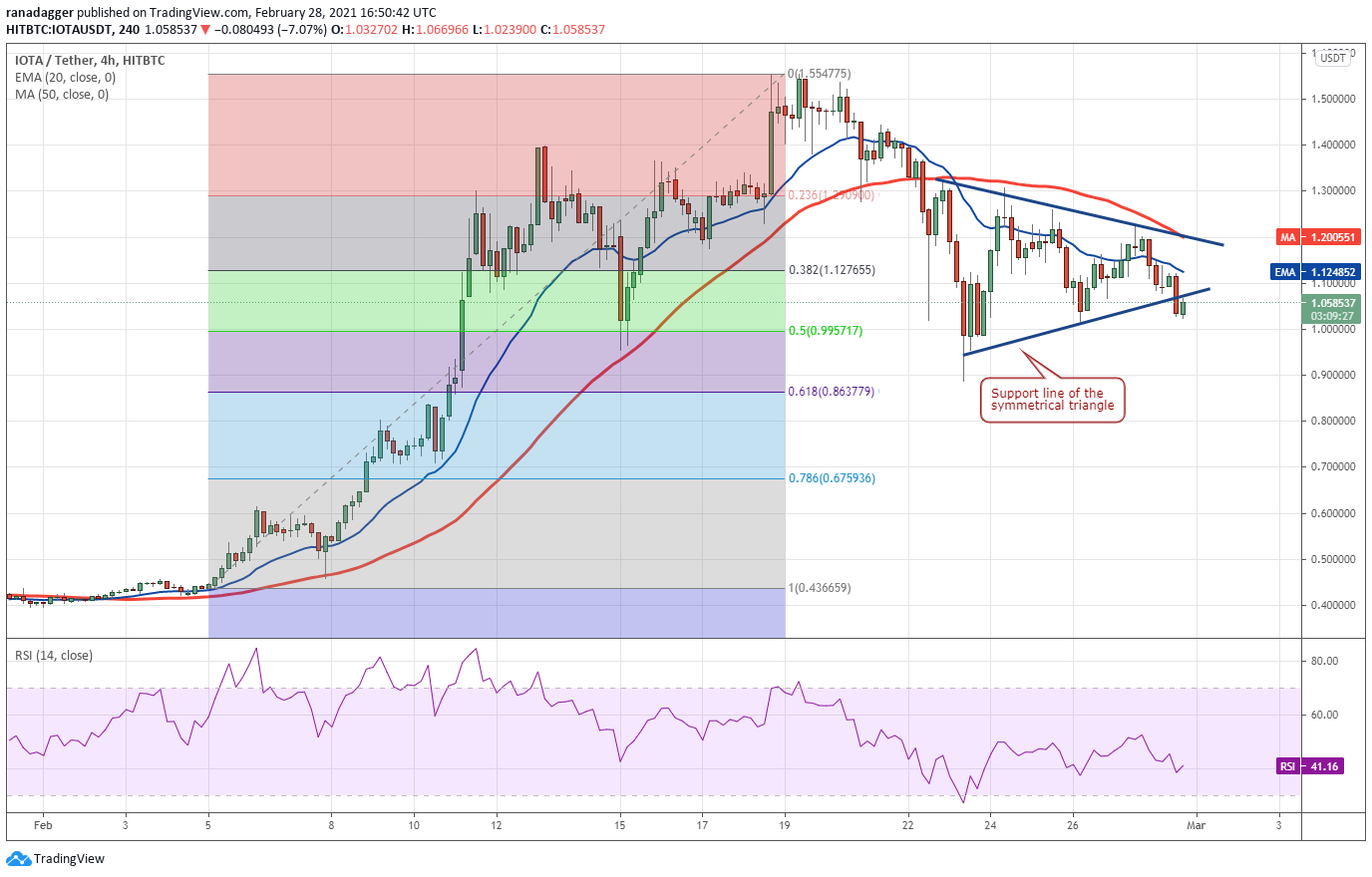 The 4 Hour Chart shows the formation of a symmetrical triangle, which generally acts as a continuation pattern. Both moving averages are gradually falling and the RSI is in negative territory, indicating an advantage for the bears.

The pair is broken below the triangle’s support line but the bulls are trying to halt the decline and push the price back into the triangle. If they are successful, it is recommended that you buy at lower levels. The bulls gain the upper hand after the pair holds above the triangle.

However, if the price deviates from current levels, it may signal the start of a deeper correction.