Bitcoin (BTC) price has not yet returned to $ 40,000 levels, and traders who expected the uptrend to resume quickly may have been surprised by the recent pullback. This could have resulted in the liquidation of cryptocurrency futures positions valued at around $ 500 million in the past 24 hours.

Over-lever positions provide the necessary ammunition during the uptrend but become a liability when the trend reaches a tipping point.

When the markets give way, leveraged long positions quickly turn into a loss, leading to margin calls from brokers. If the margin requirements are not met, the brokers discard the positions at the market price, which leads to a sharp drop.

Hence, data pointing to a decline in leveraged Bitcoin positions in the past few days is a positive sign as it reduces the risk of liquidates cascading.

While a sharp drop is usually avoided if the markets are not overfunded, a sustained buy is required to maintain the higher levels. If this does not happen, the price will gradually correct itself.

Grayscale Investments has been a major taker in the past few months, but now they have a new competitor, Osprey Funds, which will be listed over the counter under the ticker symbol OBTC on Jan. 15. The company offers a competitive management fee structure compared to grayscale.

This is a positive sign for the crypto markets because if both companies attract institutional investors, buying can resume and Bitcoin can reverse course to make new highs.

While bitcoin gets stuck in one area, select altcoins run hard. Let’s study the charts of the top 5 cryptocurrencies that might be favored by the bulls in the next few days.

Bitcoin is currently consolidating in an upward trend. The price movement of the past few days has formed a symmetrical triangle that generally acts as a continuation pattern. The long tail on today’s candlestick indicates that the bulls are buying the dips at the 20-day exponential moving average ($ 34,241).

The rising moving averages and the relative strength index (RSI) in positive territory suggest that the bulls are in control. If buyers can push price above the triangle, the next part of the uptrend could begin.

Contrary to this assumption, if the rebound does not find buyers at higher levels, the bears could seek to bring the price below the triangle. If successful, the pair can fall to the 38.2% Fibonacci retracement level at $ 29,688.10.

This level may attract buyers, but if the bulls do not push price above the 20-day EMA, the correction could deepen to the simple 50-day moving average ($ 26,581). 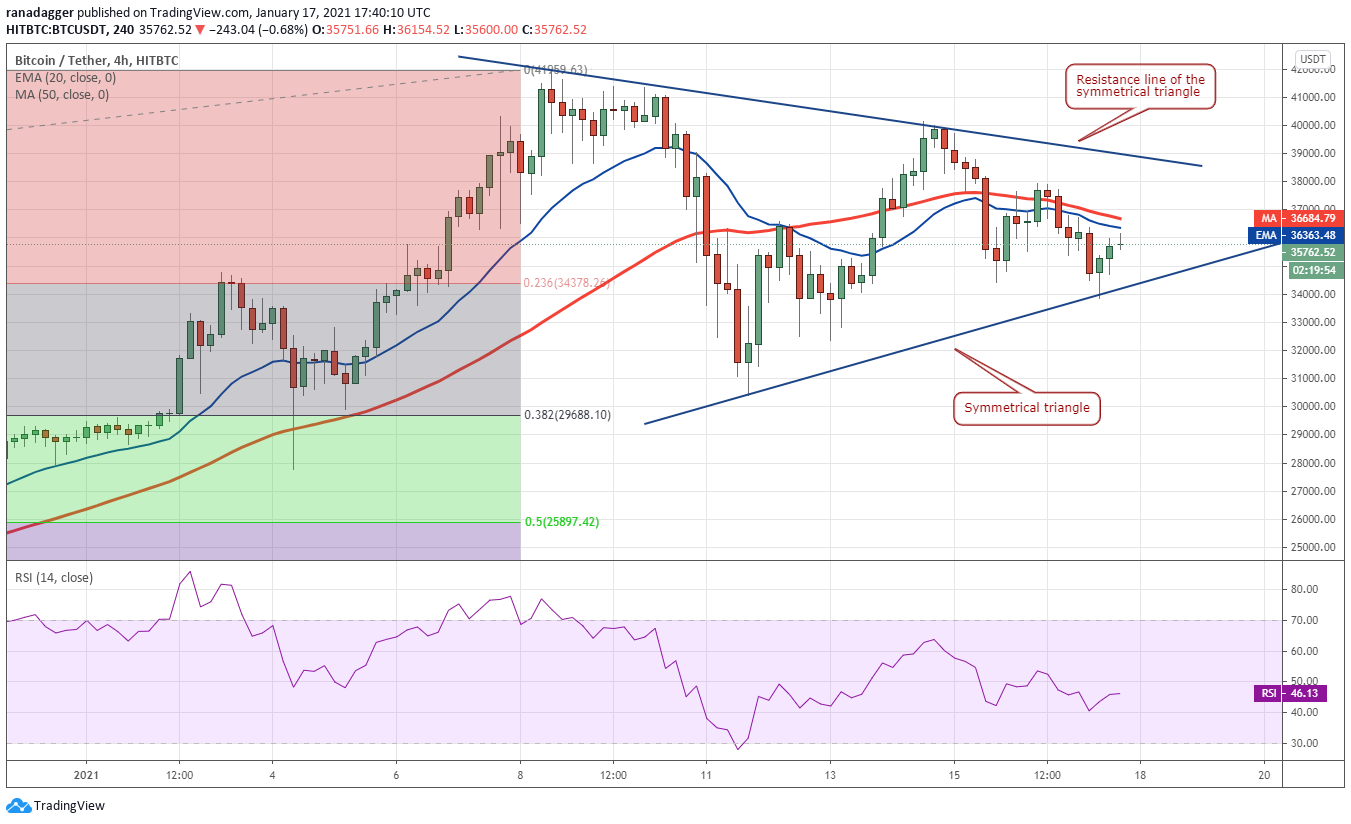 The 4-hour chart shows that the bulls bought the drop on the symmetrical triangle support line but may face resistance on the falling moving averages.

When the price deviates from the moving averages, the bears will try to bring the price below the triangle. If they are successful, a deeper correction is likely.

On the contrary, if the bulls can push the price above the moving averages, the pair can rise to the resistance line of the symmetrical triangle. A breakout of this resistance can trigger the uptrend.

However, if the price deviates from the resistance line of the triangle, the pair can still trade within the triangle for a few more days.

Chainlink (LINK) crossed the resistance of $ 20.1111 on Jan 15 and followed with another uptrend on Jan 16, hitting a new all-time high of $ 22.96. But the long wick on the January 16 candlestick suggests a profit posting at higher levels. 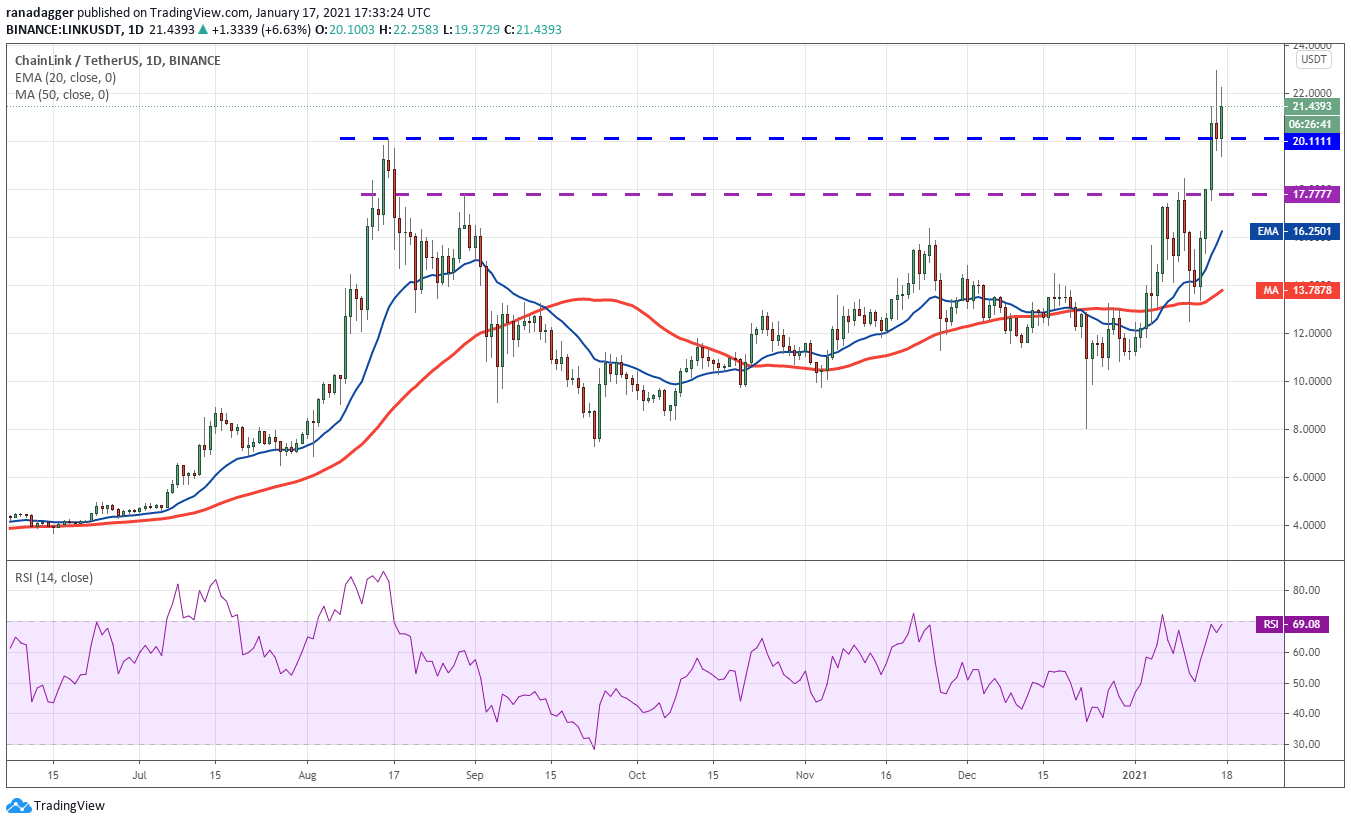 The price rebounded from the breakout level of $ 20.1111 today, suggesting that the bulls flipped that level in support. If the bulls can push the price above $ 23 now, the LINK / USD pair could rise to $ 27 and then to $ 30.

The rising 20-day EMA ($ 16.25) and the RSI near the overbought zone suggest that the bulls are in control.

Contrary to this assumption, if the price drops below $ 20.1111, the next stop should be at $ 17.7777. This is important support as a break below it indicates a possible change in trend. 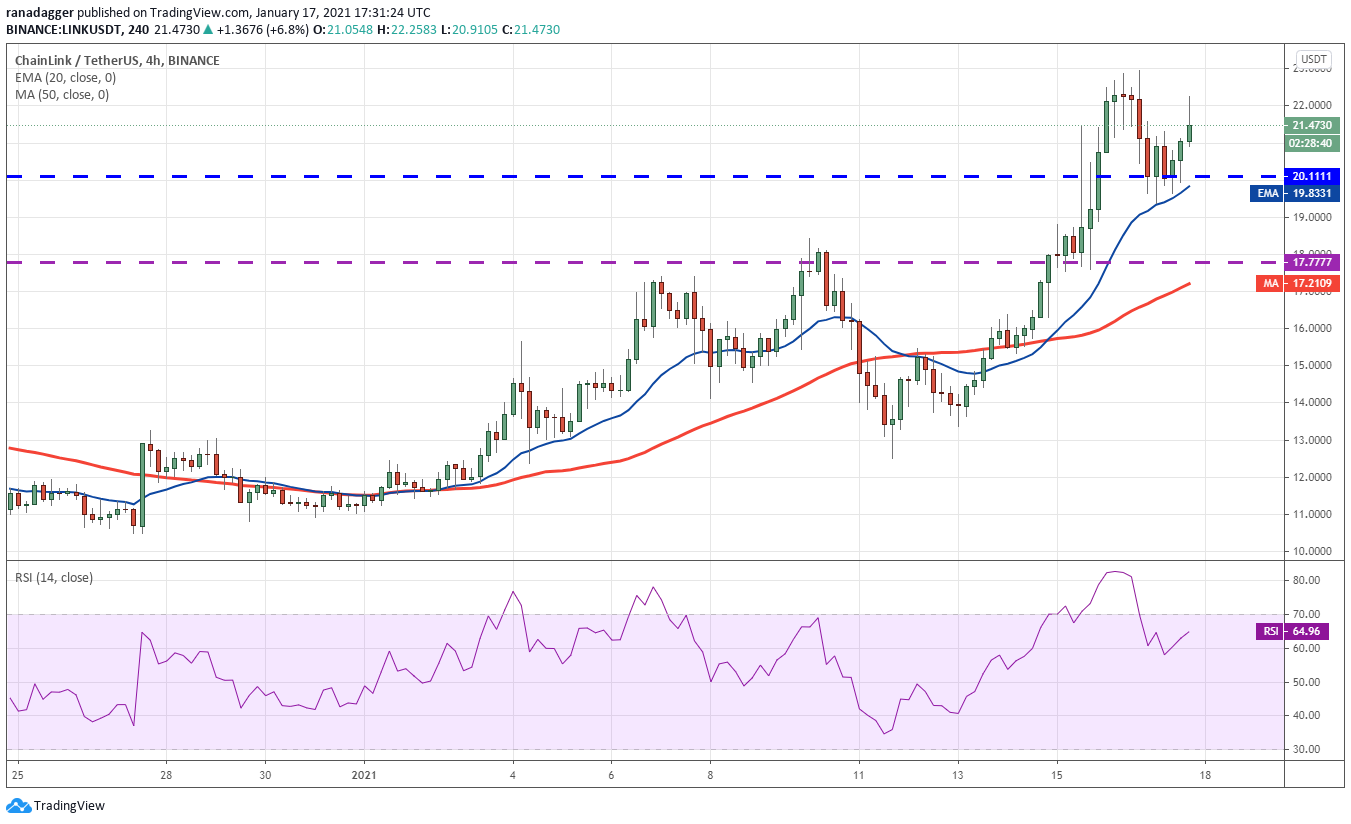 The 4-hour chart shows that the breakout above $ 20.1111 has pushed the RSI deep into overbought territory, potentially leading to profit booking by short-term traders.

The positive sign, however, is that the bulls aggressively bought the dip for the 20-EMA. If the bulls can hold the price above $ 21,5709, the pair can retest $ 22.96. A break above this resistance can resume the uptrend. The rising moving averages and the RSI in the positive zone suggest that bulls have the upper hand.

This bullish view will be invalidated if the bears sink and keep the price below the 20-EMA. Such a move could bring the price down to $ 17.7777, indicating that momentum has weakened.

Uniswap (UNI) is currently in an uptrend but is poised to sell above the $ 9 mark, as evidenced by the January 16 long wick and today’s candlestick. Unless the bulls are giving up much ground, it suggests that after the recent rally, traders are not rushing to the exit and buying on dips. 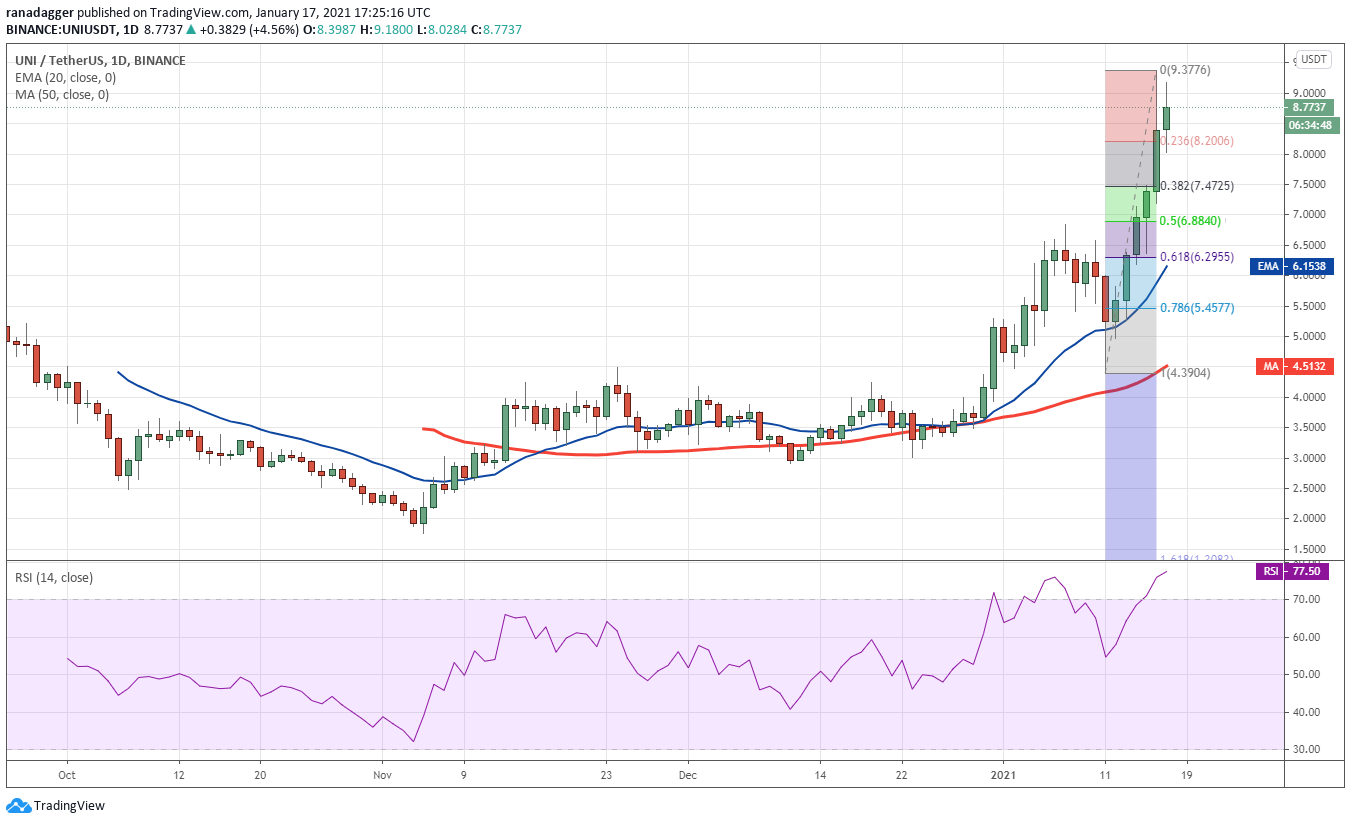 The rising 20-day EMA ($ 6.15) and the RSI in the overbought territory suggest that bulls have the upper hand. If the UNI / USD pair stays above the Fibonacci retracement level of 38.2% at $ 7.4725, the bulls will seek to resume the uptrend.

Contrary to this assumption, if the bears cut the price below $ 7.4725, the pair could fall to the 20-day EMA. Usually a deep correction indicates that momentum has weakened and this may lead to a few days of range action. 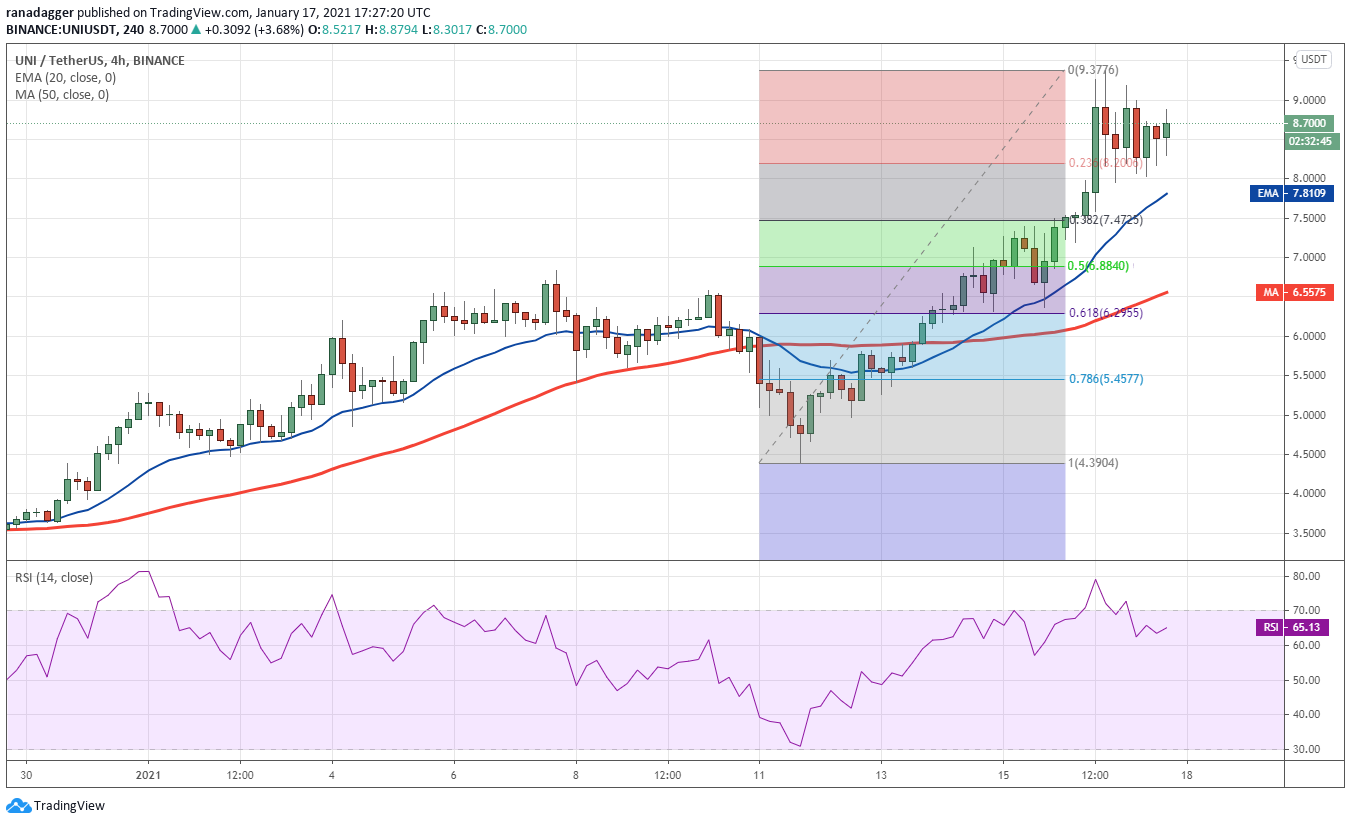 The 4-hour chart shows the pair is currently consolidating after the recent strong uptrend. The bulls buy the jump to the $ 8 support and the bears sell above $ 9.

If the bulls can push the price above the $ 9 to $ 9.3776 overhead resistance, the uptrend could resume.

Conversely, if the bears cut the price below the 20-EMA, the decline could extend to the 50-SMA. Such a move could keep the couple on reach for a few days.

Tezos (XTZ) has been stuck in the $ 2.85-1.85 range for the past few weeks. The bulls are currently trying to push the price above the range and initiate a new uptrend. 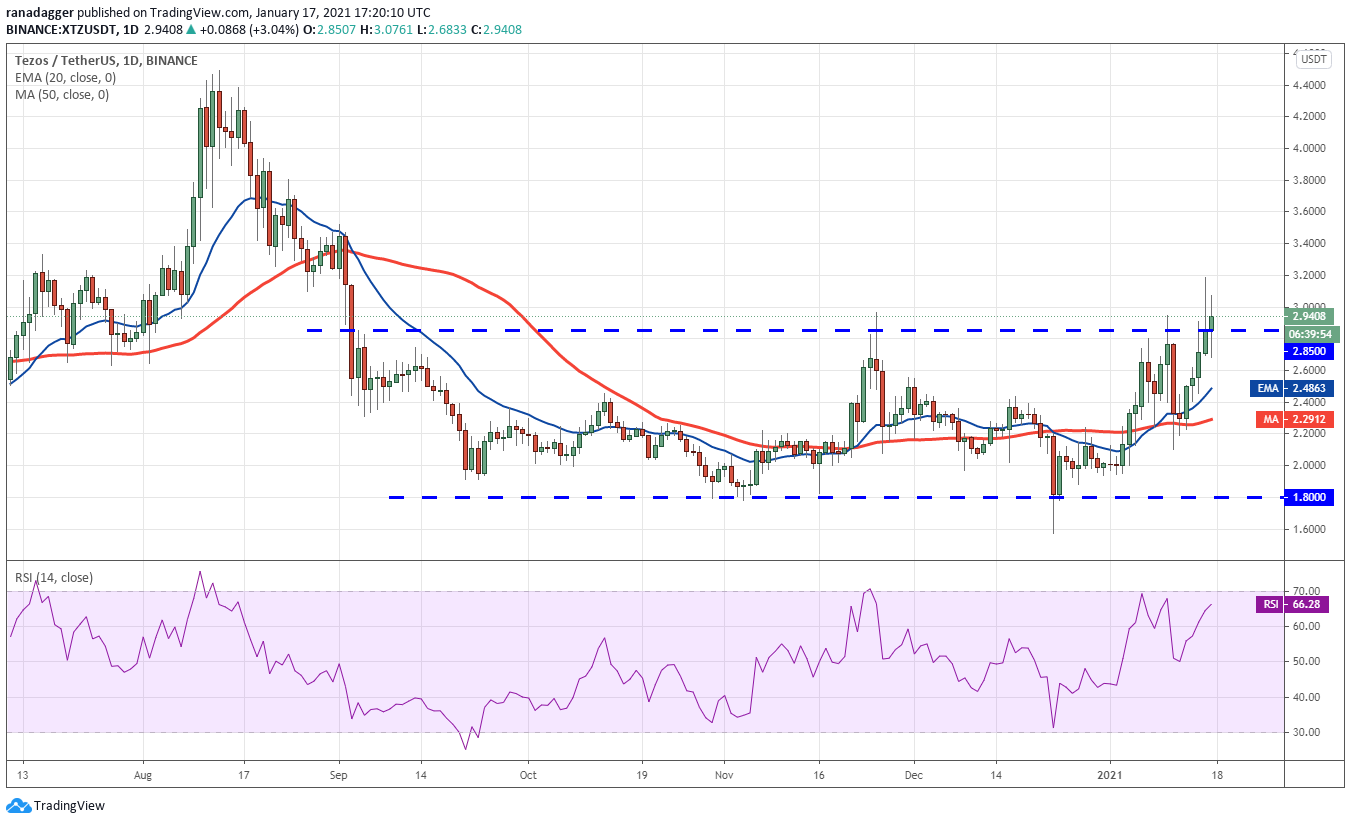 If the bulls can hold the price above $ 2.85, the possibility of a new uptrend increases. The rising 20-day EMA ($ 2.48) and the RSI above 66 suggest that the path of least resistance is on the upside. 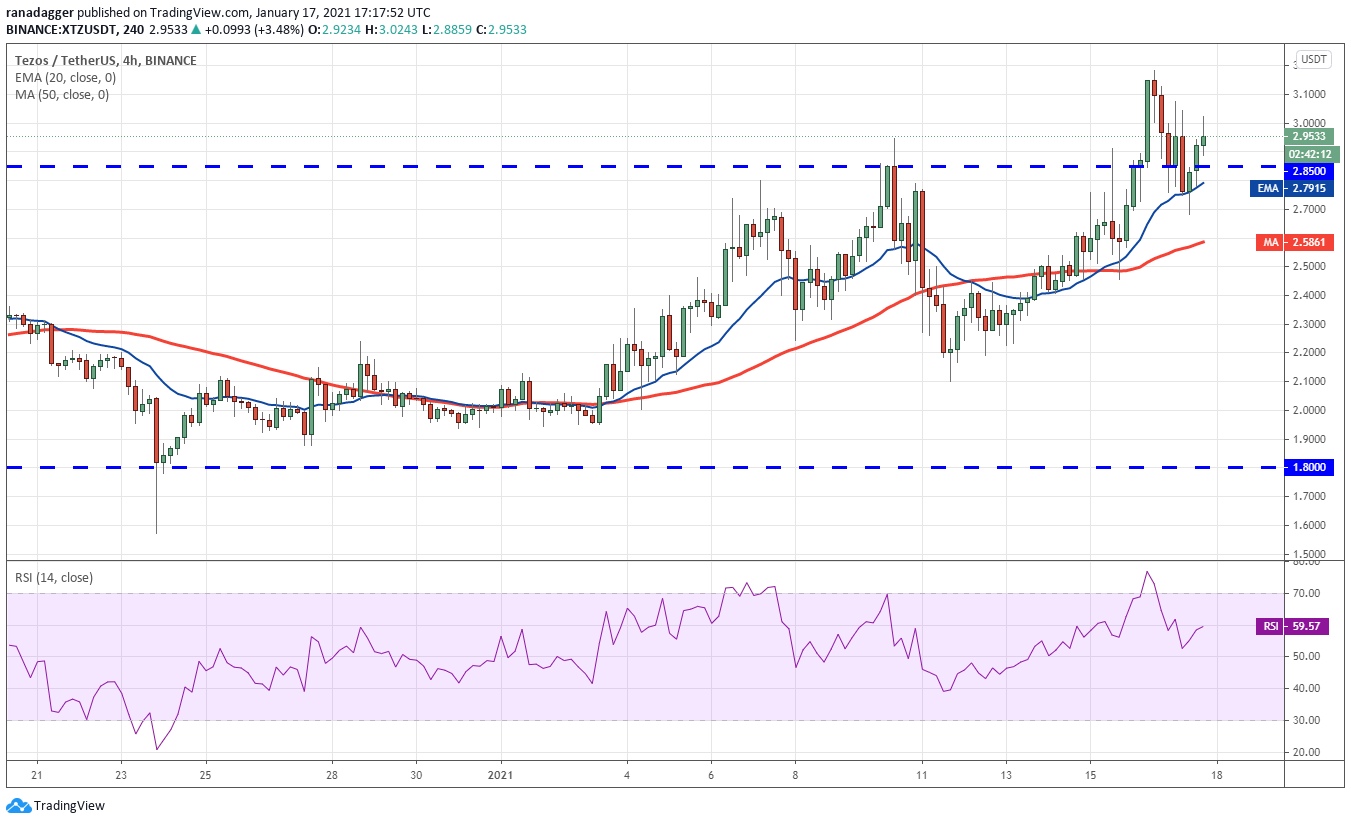 The 4-hour chart shows that the bulls pushed the price above $ 2.85 but failed to build on strength, which resulted in a correction. However, the bulls aggressively bought the jump into the 20-EMA and are now trying to push the price above $ 3.1838. If they are successful, the upward trend could resume.

On the contrary, if price deviates from current levels or overhead resistance and falls below the 20-EMA, it could correct to the 50-SMA. A break below this support could signal that the recent breakout above USD 2.85 was a bull trap. 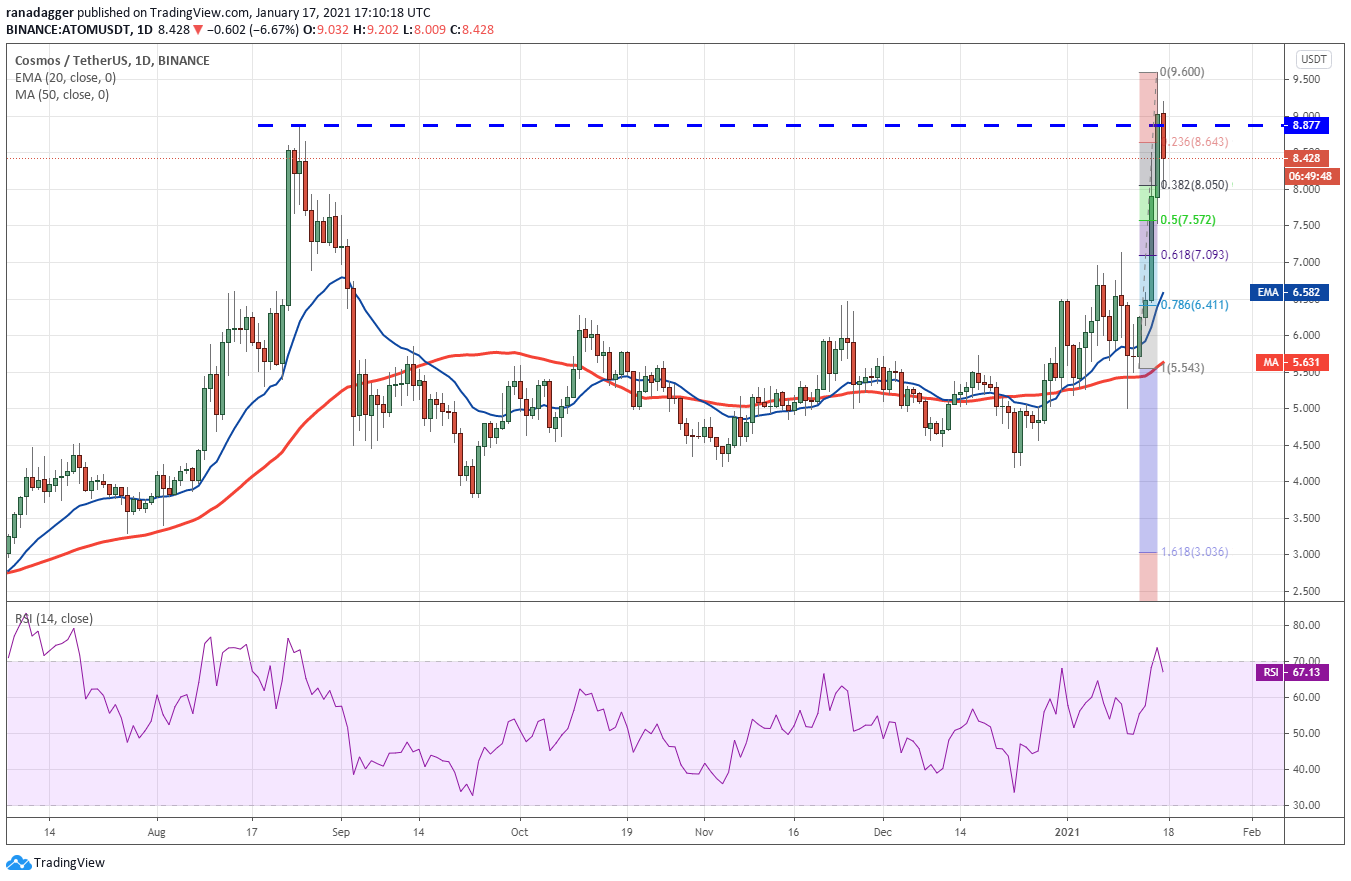 However, the bears haven’t given up yet as they brought the price back below $ 8.877 and are trying to catch the aggressive bulls. The bullish momentum could weaken if the bears cut the price below the 61.8% Fibonacci retracement level at $ 7.093. 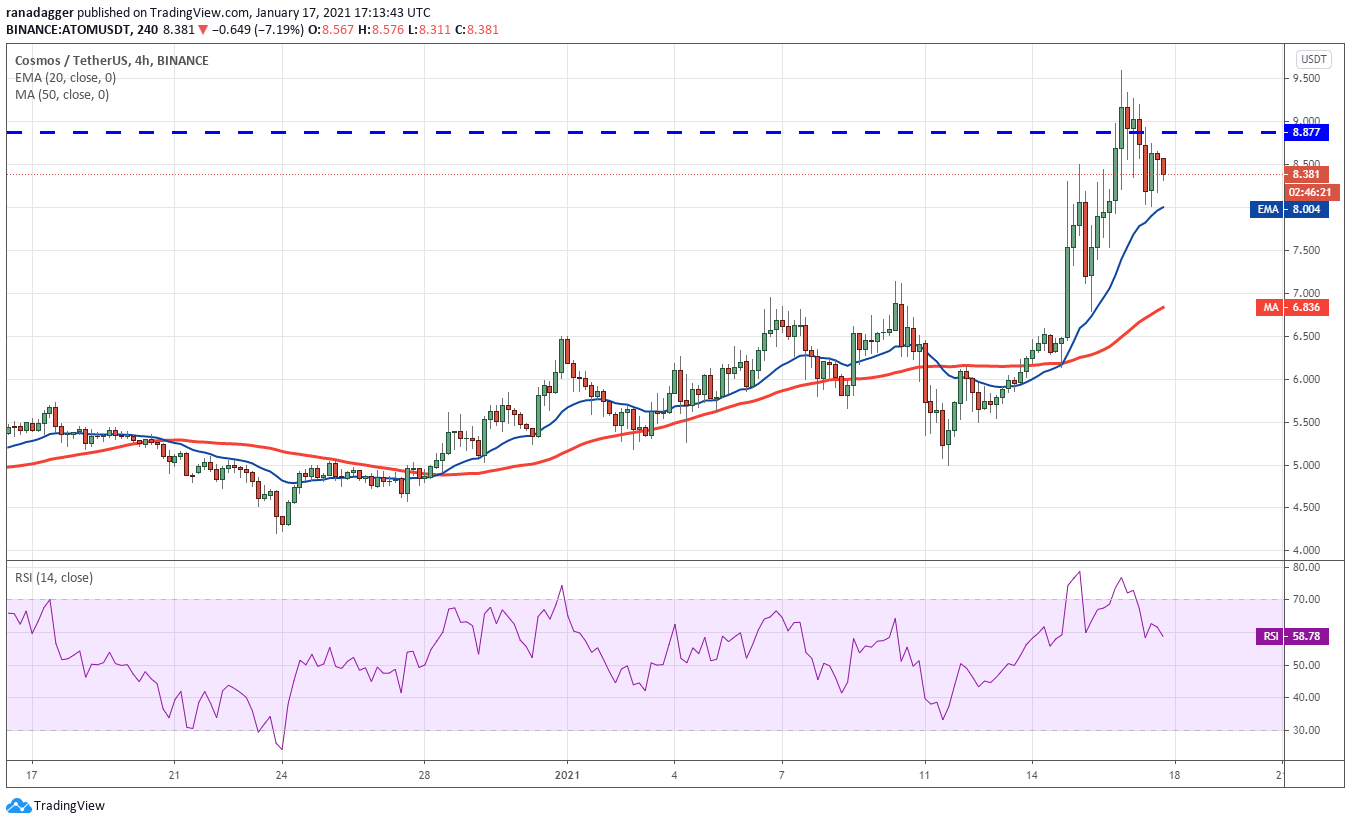 Both moving averages are rising and the RSI is in positive territory, indicating that bulls have the edge. The pair has rallied from the 20-EMA and the bulls will now seek to push the price above the overhead resistance of $ 8.877.

If successful, the pair could rise to $ 9.60 and a break above it signals the resumption of the uptrend. Conversely, if the bears pull the price below the 20 EMA, it suggests that momentum has slowed and a decline to $ 7.50 and then the 50 SMA is possible.