Decentralized finance is fast becoming a cornerstone of the cryptocurrency sector, but the ecosystem is increasingly centralized in the Ethereum network, causing the entire sector to be plagued with high gas fees and slow transaction confirmations.

This explosive rise in gas charges is causing users to look for other options, and one alternative is flamingo funding. The protocol is based on the NEO blockchain and was developed with an emphasis on governance and interoperability.

Interoperability has also become an important issue in the crypto sector, as separate blockchains and isolated DeFi platforms need a way to communicate with one another and act across protocols.

The Flamingo (FLM) price recently hit a new high for 2021 as the DeFi Protocol saw a surge in trading volume on February 1, which helped its token double overnight.

Three reasons for the recent 200% increase in the FLM price are the recent expansion of governance functions, DeFi’s first mover advantage on the NEO blockchain, and record trading volumes.

In January, the 24-hour trading volume for FLM fluctuated between $ 6 million and $ 20 million. Between January 31 and February 1, the volume of purchases more than quadrupled from the previous day, reaching a record $ 93.4 million in 24 hours, increasing the price from $ 0.21 to $ 0.31 is.

A closer look at the project’s recent announcements reveals that the motivating factor behind the increase in volume was a new governance proposal that was put to the community’s vote.

Since the end of the vote, FLM’s daily trading volume has fallen by $ 29.7 million, the second highest since September 2020. 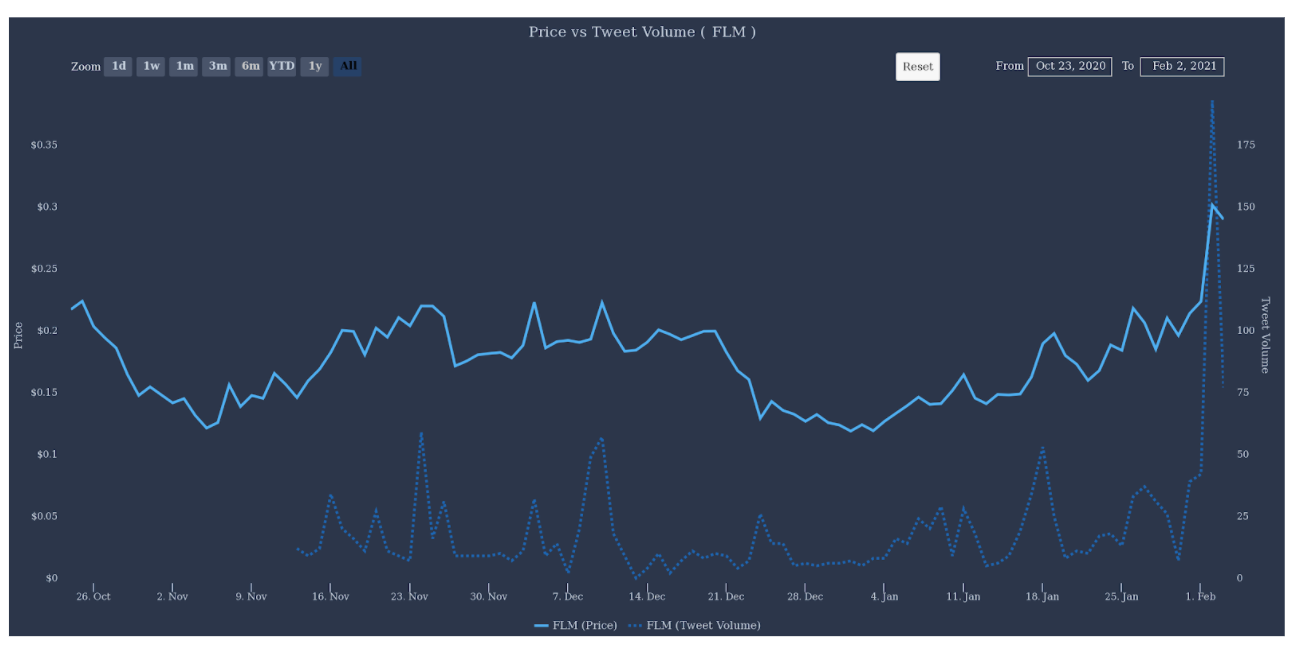 As shown above, the rise in price and volume also coincided with an increase in Twitter volume as community members responded positively to the announcement.

Simultaneously with an increase in FLM’s purchase volume, the latest governance proposal for the flamingo community, also known as the Flamingo Improvement Proposal (FIP), has been released. This is the second voting option for members of the platform and focuses on redesigning the Flamingo platform’s asset flow to improve the overall usability and interoperability of the assets.

According to the Flamingo website, the proposed updates will help evolve the “sophisticated asset synthesis process” established at initial launch into a more innovative design that “optimizes the cross-chain asset flow process while maintaining value retention on the original asset maintains. ”

The redesign goals include: restoring the value link between cross-chain assets and the underlying original assets; Improving the robustness and future-proofing of Flamingo’s asset flow design; and to further develop Flamincome as the ultimate earnings booster for Ethereum.

Flamingo appears to be well positioned to benefit from further expansion of decentralized funding and has the opportunity to break into the market on the NEO blockchain as it is currently the largest and most developed DeFi platform on the network.

Tokens available for staking include packaged forms of Bitcoin (BTC), Ether (ETH) and Tether (USDT) as well as NEO, Ontology (ONT) and Switcheo (SWTH). The liquidity on the platform is currently around 100 million US dollars with a 24-hour volume of 3.4 million US dollars.

DeFi’s continued growth, reflected in an increase in total value and 24-hour volume, is likely to translate into positive developments for FLM going forward.

As token holders look for options to avoid high gas fees on the Ethereum network, platforms like Flamingo, which offer the ability to conduct transactions in both BTC and ETH for a cost of 0.01 GAS, could see an influx of activity record.