Hacken, a well-known community for cybersecurity, blockchain and cryptocurrency, is organizing the first Gray Hat Hackers ideas competition, where hackers and computer enthusiasts can submit their ideas to identify and combat vulnerabilities in crypto and DeFi projects. The hackathon offers gray hat hackers the opportunity to implement their ideas as legitimate white hat hackers with the support of the hacking community.

As of January 19, 2021, the hacking community accepted ideas for the hackathon on its website. As applications began to come in, someone found an innovative way to submit their application. That included hacking into the website and posting a message with information about their idea for the hackathon.

The message left on the website by the hackers said that the website was hacked and they thought that by hacking into the website to submit their idea, they would have a better chance of winning the competition. These innovative applicants plan to develop a project that uses artificial intelligence and machine learning to secure DeFi projects based on Ethereum and Polkadot. As part of this project, they intend to create an on-chain global database of wallets with illicit funds so that DeFi solutions can fight money laundering.

After the hack, Hacken’s team worked with his community to regain access to the website. Meanwhile, Hacken’s CEO Dyma Budorin confirmed the hackers’ unique proposal by saying:

“We helped our community get the site back up and running. That wasn’t typical hacking. The hackers have decided to present themselves and apply to participate in the hackathon. We contacted them to clarify the details of the project. Although we do not support hacking, the project in question is paying close attention. We suggest that the project has the potential to have an impact on the further development of the DeFi market. “

Hacken also confirmed that all applications received prior to the incident are intact and will be reviewed according to standard process. Applications for the first Gray Hat Hackers Ideas Contest are open until January 31, followed by the announcement of selected ideas on February 3, 2021. 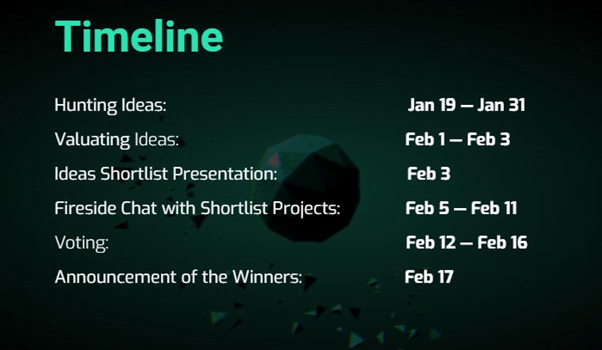 The winning team will receive a reward of 600,000 HAI, while the second and third positions will receive 300,000 HAI and 100,000 HAI, respectively. A special price of 5000 USDT is also on offer. Enter the Gray Hat Hackers ideas competition at – https://ihktn.com/.

Image by Ryan McGuire from Pixabay