When Bitcoin (BTC) price tested the low of $ 17,580 on December 11th, investors remained relatively calm, despite some analysts issuing bearish estimates. Last week’s trading may have reached the levels it started at, but Bitcoin fundamentals have gotten even stronger.

Every time Bitcoin hits a new high, investors expect a correction. Although it failed to break the $ 24,000 resistance, the price quickly rebounded from falling below $ 22,000 on December 21. This event might have given sellers hope, but under the hood there is not a single sign of weakness.

Over the past week, Bitcoin dominance continued to grow as it rose from 64.3% to 67.3%. That move was supported by Dubai-based financial advisory firm deVere Group’s forecast of $ 46,000 in 2021. In addition, the Chicago Mercantile Exchange (CME) exceeded $ 1.3 billion in futures contracts. This is undeniable evidence of the growing institutional involvement in the BTC markets.

This news appears to have given investors further confidence, which caused Bitcoin to hit a new all-time high of $ 24,300 on December 20.

Over the past week, Bitcoin outperformed the top 15 altcoins, which rose 7.7% on average. More importantly, the volume of Altcoins compared to Bitcoin was 50% disappointing. This indicator bolsters the recent dominance performance, as does the introduction of $ 22,500 by BTC as a new support.

Crypto fund manager Grayscale Investments has continued to aggressively add BTC to its portfolio, which now contains $ 13.3 billion in Bitcoin. 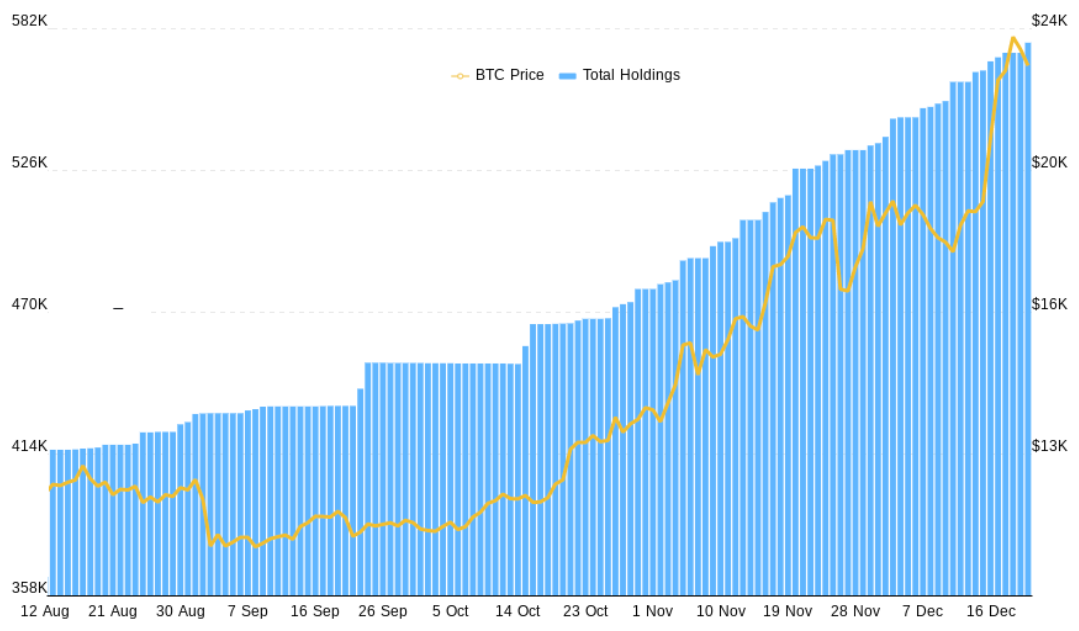 In the past week, 11,620 BTC was added for a total of 576,650 BTC. So it was another excellent week for Grayscale Bitcoin Trust. Similar excitement can be seen when analyzing the fund premium over the effective BTC of each stock, which is currently 0.00095064 BTC.

As shown above, the premium has increased from 18% to 40% in the last seven days. This exceptional level can in part be explained by a temporary suspension of the issue of new shares.

Although unusual, a similar move occurred six months ago. By discontinuing supply to institutional customers, any additional demand must be met by secondary sales, which creates pressure for a higher premium.

Perpetual contracts, also known as inverse swaps, have an embedded interest rate that is usually calculated every eight hours. The funding rates ensure that there are no imbalances in exchange rate risk. Although the open interests of buyers and sellers are the same at all times, leverage can vary.

When buyers (longs) demand more leverage, the financing rate becomes positive. Hence, the buyers are the ones who pay the fees. This problem is especially true with bull runs, which typically have more longs in demand.

Sustained rates above 2% per week lead to extreme optimism. This level is acceptable during market rallies, but problematic when BTC price is sideways or in a downtrend.

In such situations, high leverage for buyers increases the likelihood of large liquidations if the price drops sharply. 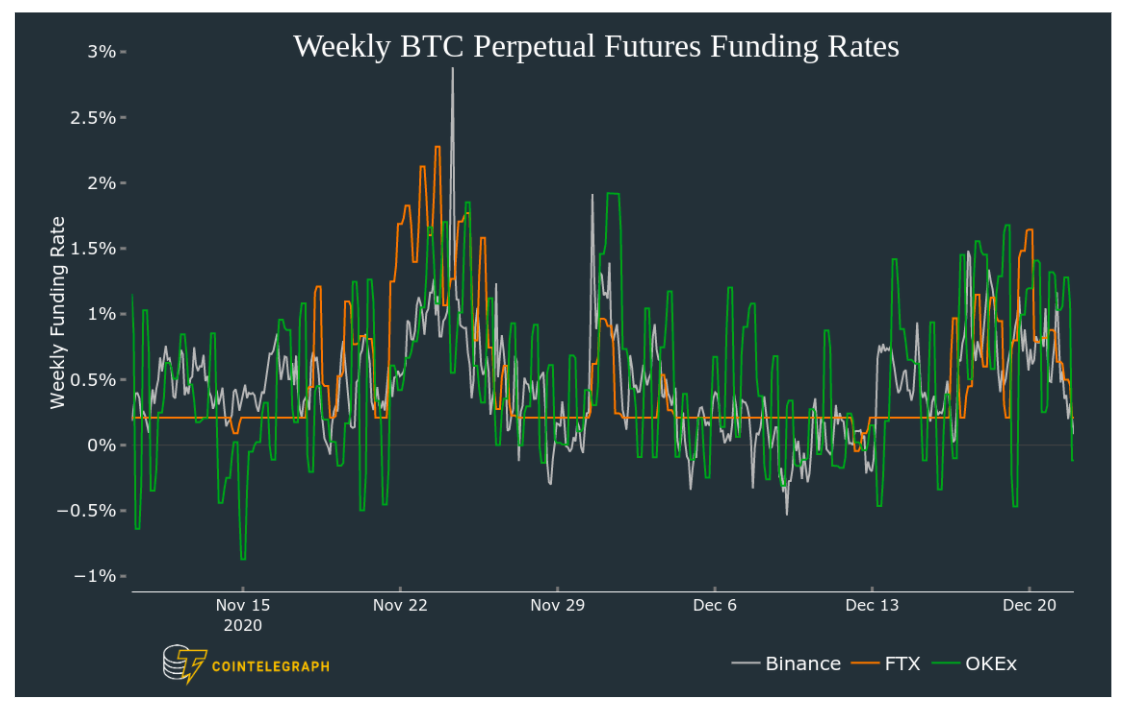 Note that despite Bitcoin’s weakness on December 21st, the weekly funding rate managed to bypass negative territory. This data shows that both short (sell) and long (buy) traders use roughly the same leverage.

This is a neutral indicator as both sides still have powder to raise their stakes.

The activities in social networks reached their peak 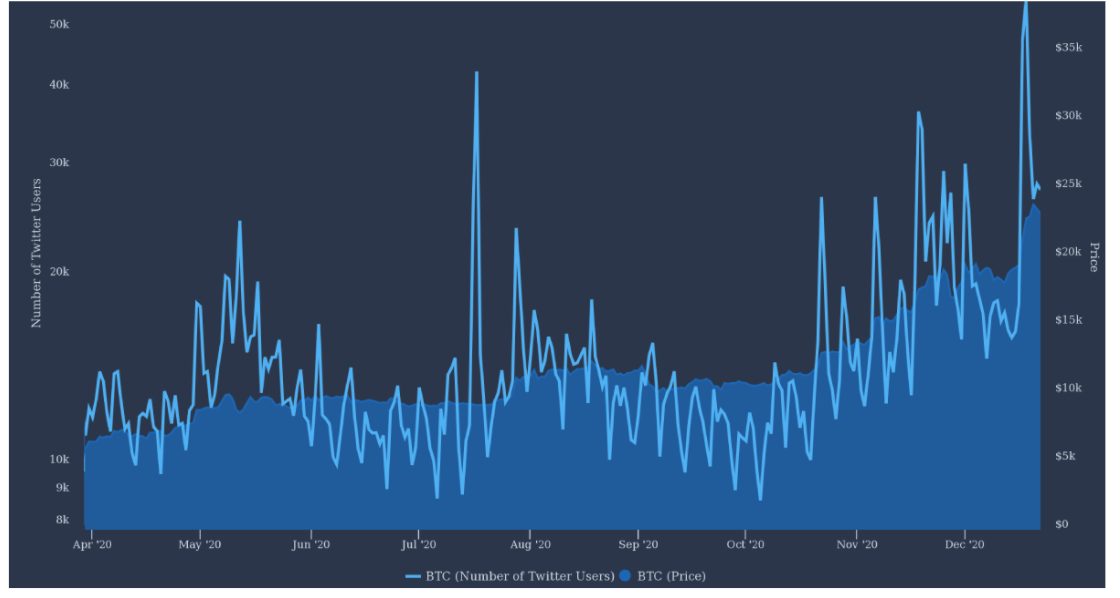 Data from TheTie also shows that there has been a recent spike in BTC prices, while tweets related to ‘Bitcoin’ have reached their highest level since December 2017. Despite the recent correction of the social activity indicator, the current level remains 10% higher than the previous month.

While a significant spike in Twitter activity might not necessarily translate into a hefty retail purchase, it will certainly help attract more attention as cryptocurrency continues its upward trend.

A put-to-call ratio of 0.70 indicates that the open positions of put options are 30% behind the more bullish calls and are therefore bullish.

In contrast, an indicator of 1.20 favors put options by 20%, which can be considered bearish. It should be noted that the metric aggregates the entire BTC options market including all calendar months.

When bitcoin price broke $ 20,000, investors rushed to seek protection from downward moves. As a result, the put-to-call ratio hit a high of 1.08 on December 19. The very unusual level that favored the more neutral bearish strategies returned soon afterwards when the indicator returned to 0.60.

This shows that investor optimism was not hurt by the 10% price correction after the all-time high of $ 24,200.

Overall, each of the indicators discussed has quickly returned to neutral to bullish territory, and this is relatively positive as the market recently tested a low of $ 21,910.

With BTC holding above $ 22,500, investors are quickly regaining their confidence while the constant setbacks from each slump is a positive sign.